This forum is about the tools you use to service your Fordson tractor AND about the implements you use when out in the field with Ol' Blue.
Post Reply
9 posts • Page 1 of 1

Hi all,
I've been wanting to post this for ages, I've finally got to it now.
In vineyard ploughing there's an area that can't get any normal implement in it: between vines. To get round this many people have come up with a special implement called the intercep. It consists of a pivoting frame that lifts and lowers and a mounting pad that pivots towards or away from the tractor, both of these are controlled by double acting rams operated by a twin valve block mounted in a handy place. There are two tools that fit on the mounting pad: a flat blade a bit like a huge hoe, and a hefty mouldboard; they're mounted by two bolts, the rear one being a "fuse" bolt in that it's very easy to break, avoiding (in theory) further damage when hitting an obstacle (we normally break it once a year in our stony field).
We remove it when we're not using it as it gets in the way a fair bit, and here is the whole thing laid out prior to fitting. 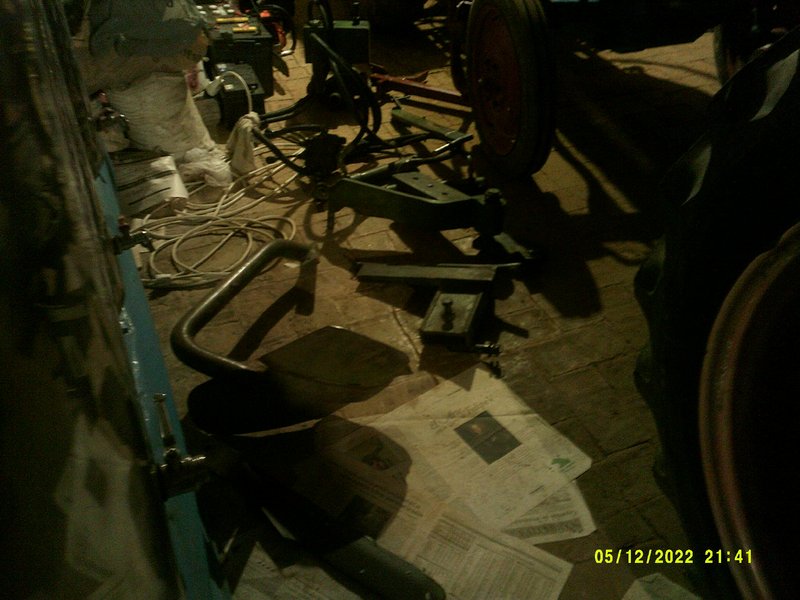 Here are the attachments. The mouldboard has suffered badly from the stones in our field. 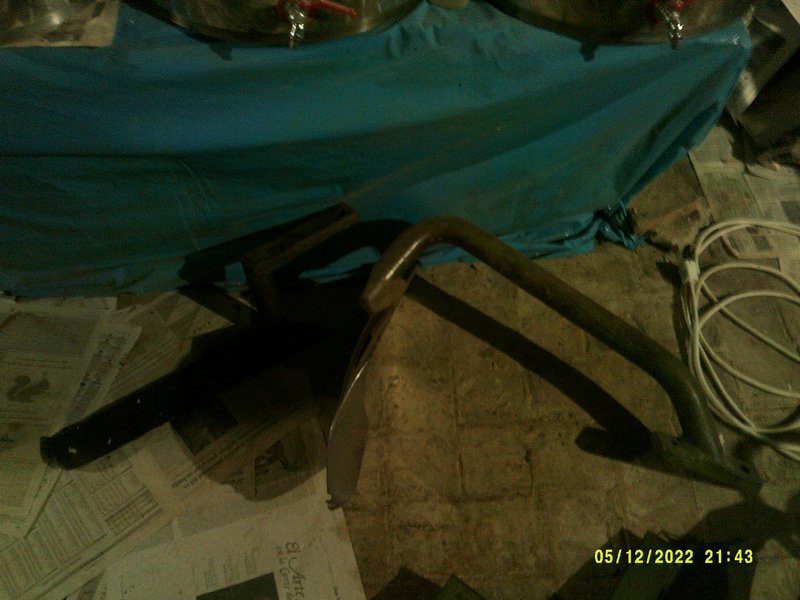 The pivoting frame is in two parts, and can be moved in and out. You can also see the mounting pad (only just!). 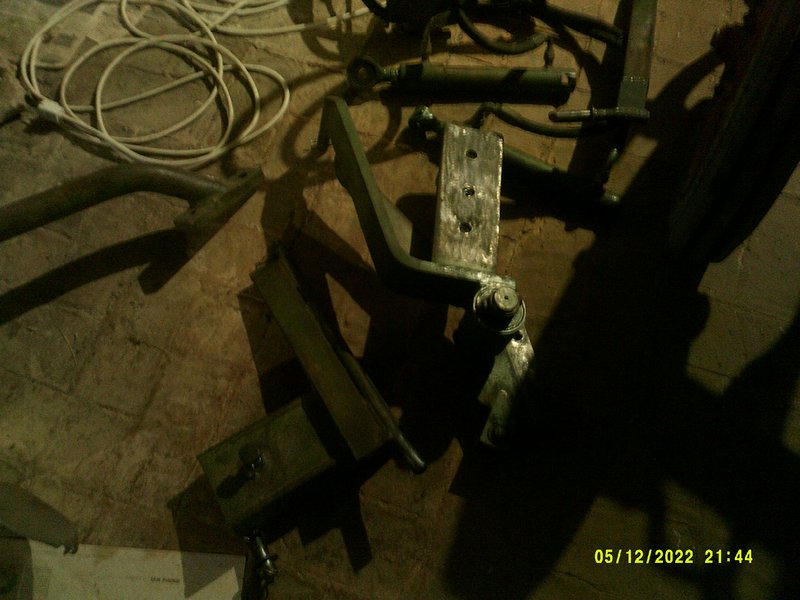 The hydraulics connsist of a pump and reservoir, valve block and two double acting rams. The valve block fits on to the bracket in the top right area. 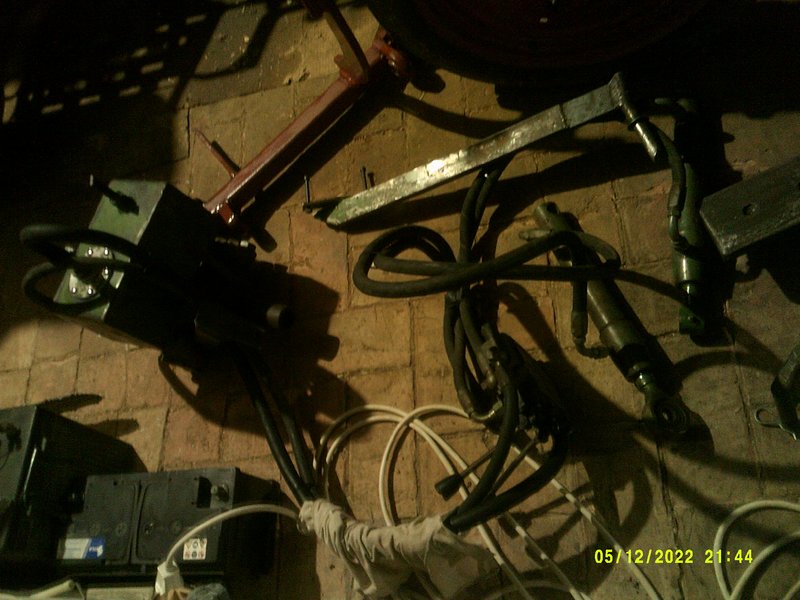 The attachment frame. The intercep was made for a John Deere, we got it second hand from that and had to make this frame from scratch so it fitted on Davie. Last winter was the first time it came off as we wanted to paint it, although we only had time for a coat of red oxide as we don't yet have the colour we want for it. 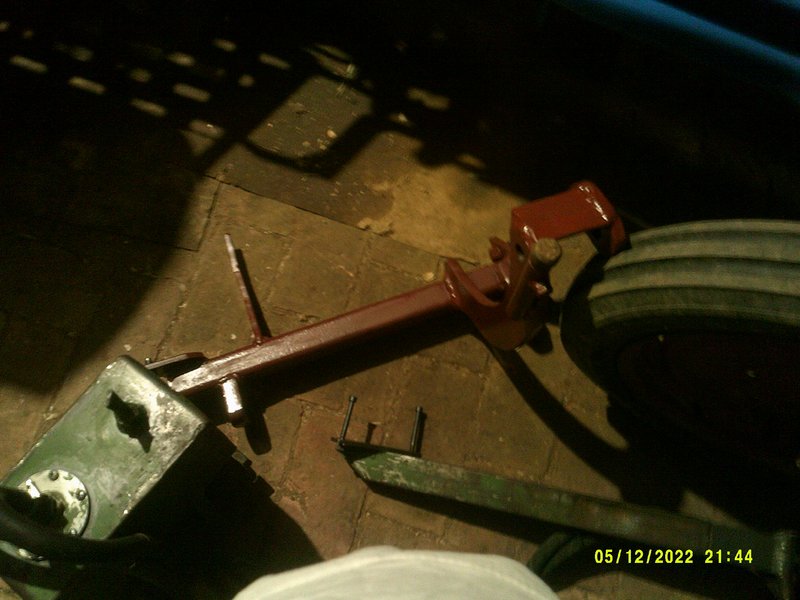 Now on to fitting it.
This is what any Dexta looks like from here. 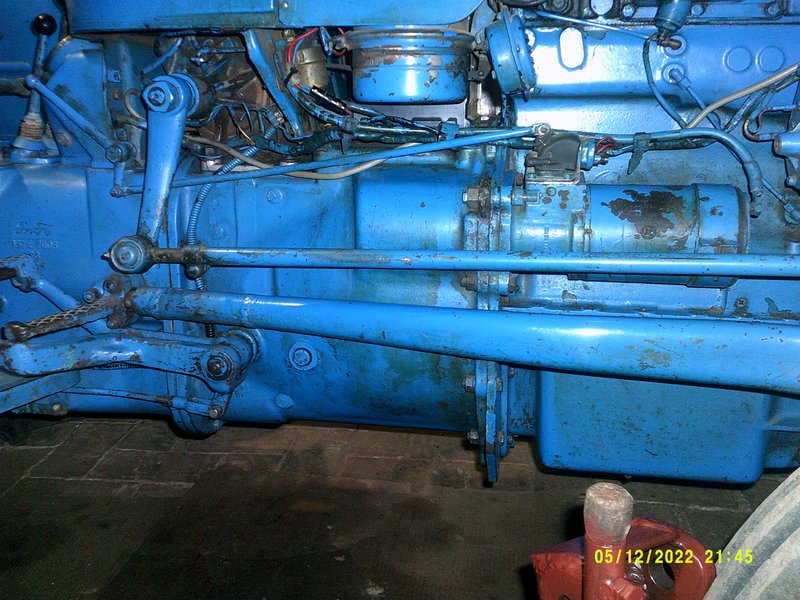 Attachment frame fitted. Three of the original bolts have been replaced with longer ones, one on the starter and two between the bell housing and gearbox.Three new bolts were fitted, two big ones on the adapter plate and one just below the footplate. You can also see the pin for the lifting ram offered up. 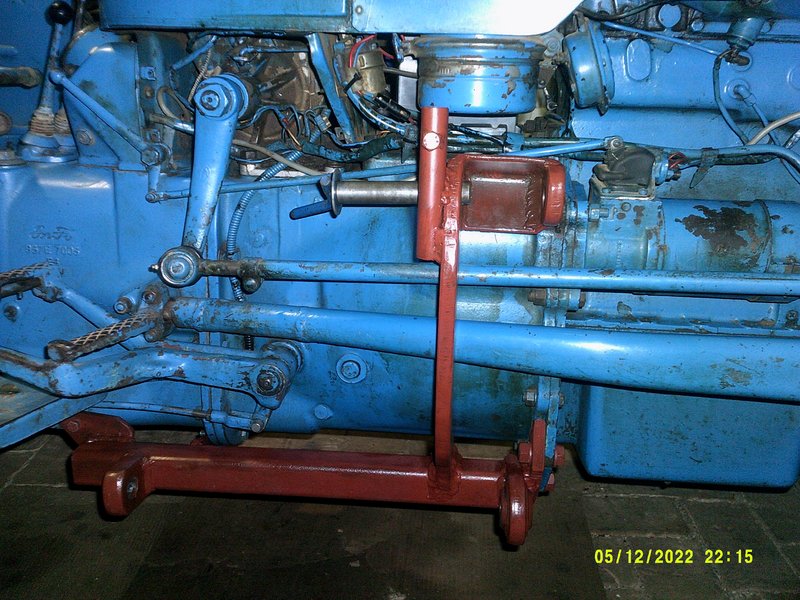 The pivoting frame inner part is fitted first, then the valve block bracket is offered up ready to be positioned once the whole thing is assembled. 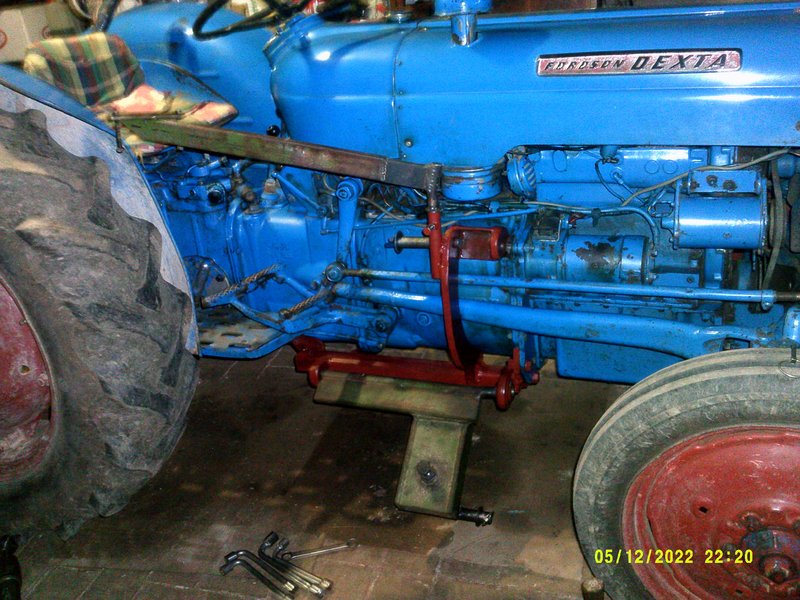 This view is also pretty typical, but there are features that are different as a result of the homemade drawbar and the fact that he's a Narrow Dexta. 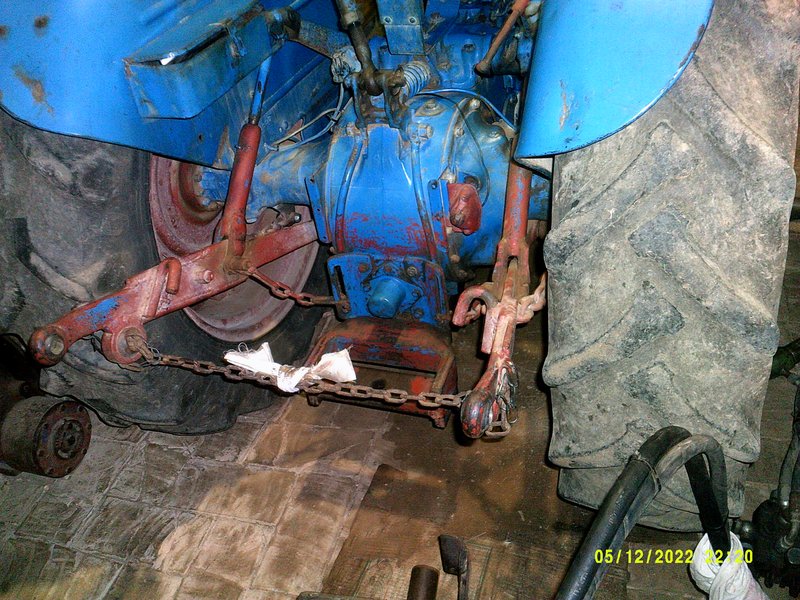 The rear end is now ready for the pump, note one check chain bracket bolt is out. 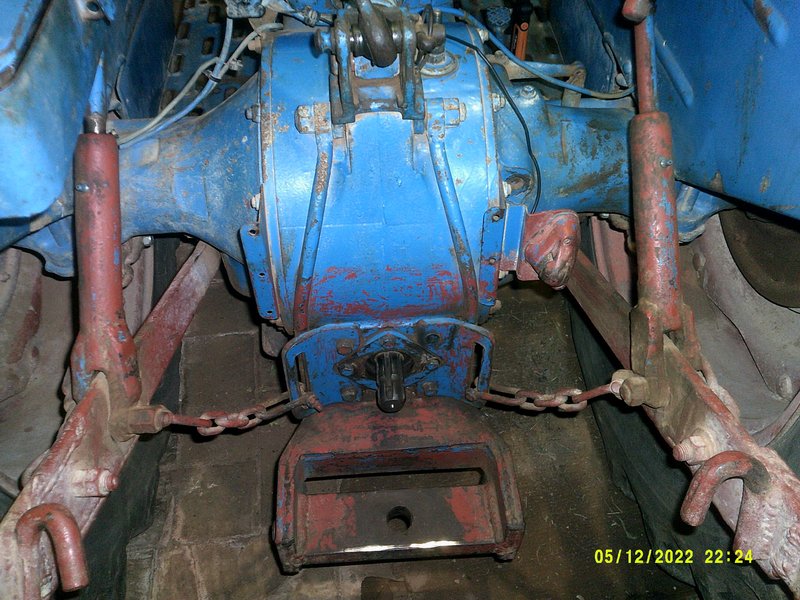 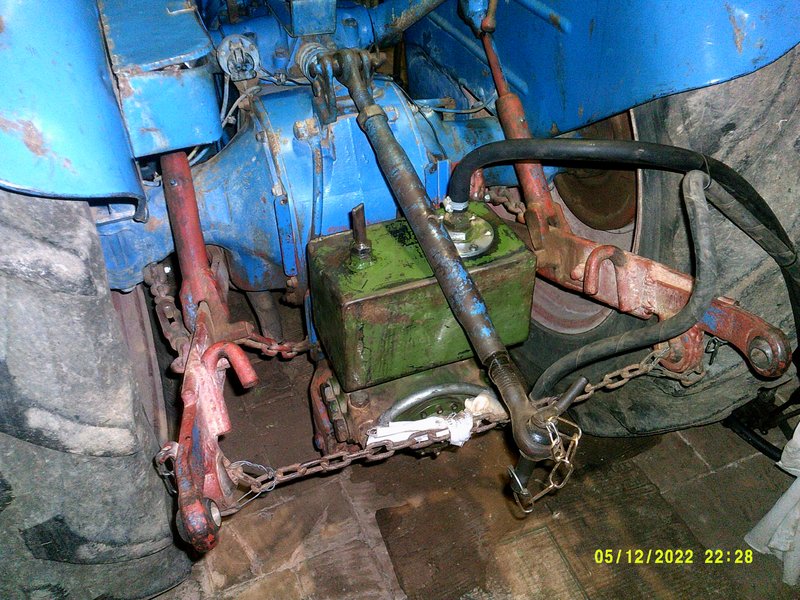 The bolt that was out holds the pump on. 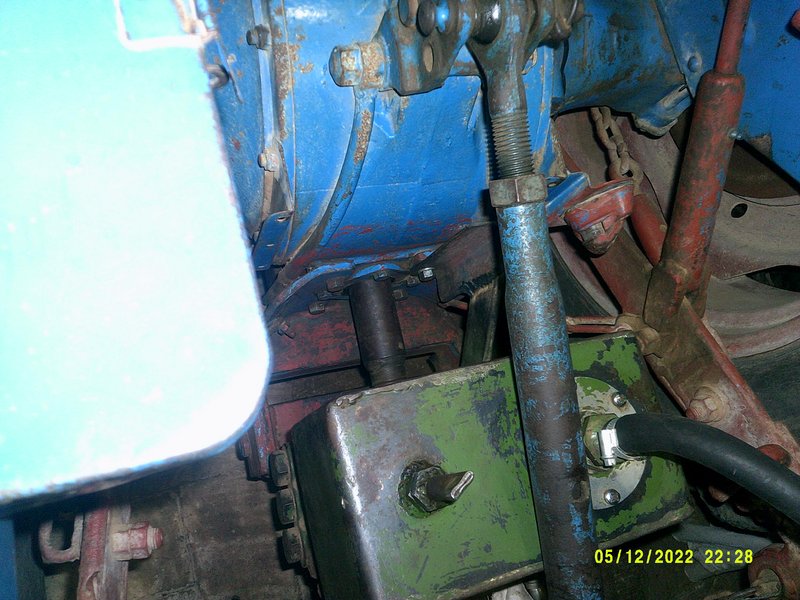 Now with the feed and return hoses in position. 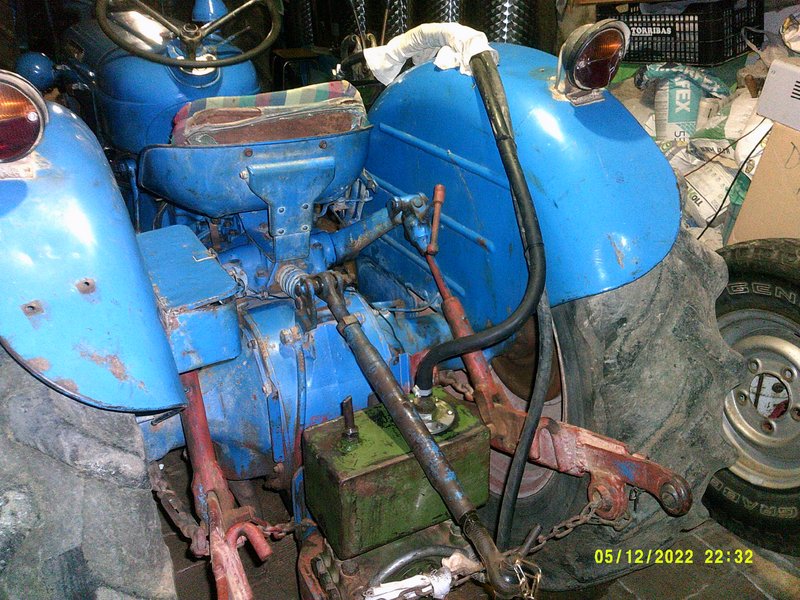 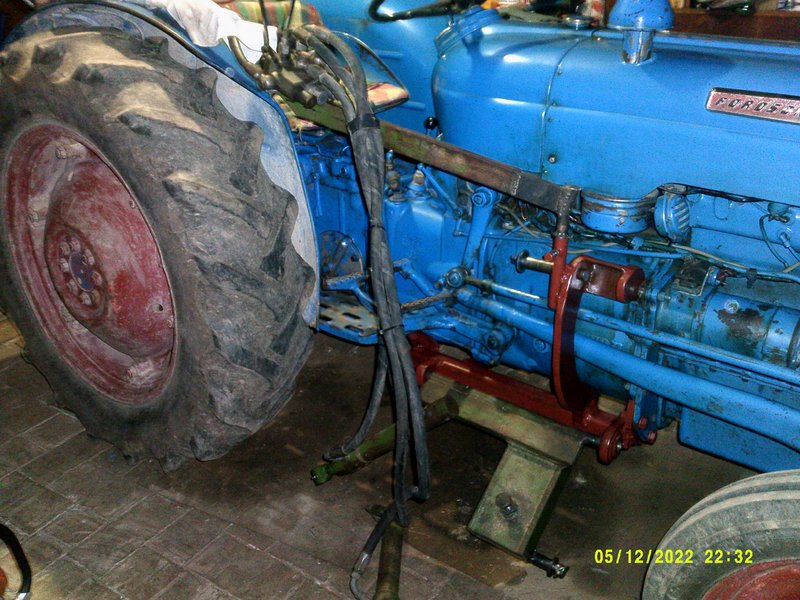 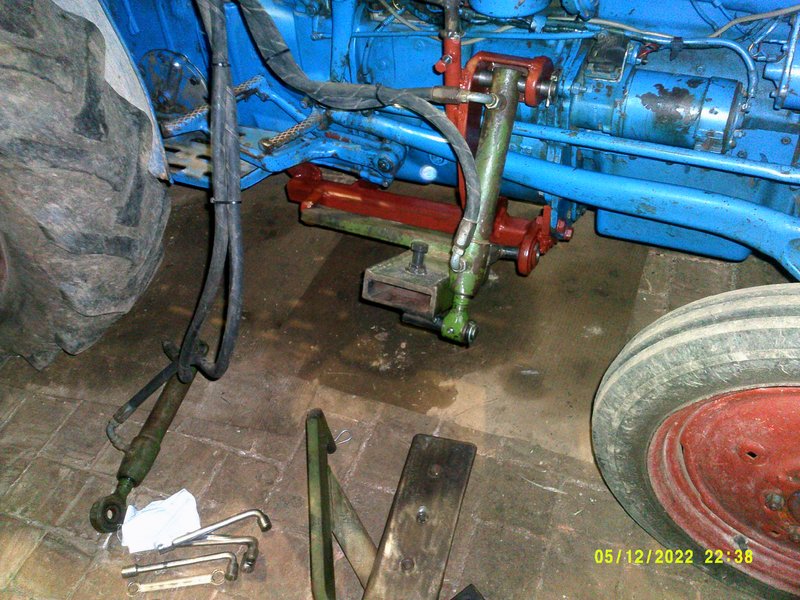 Outer pivoting frame and mounting pad, and side ram fitted. 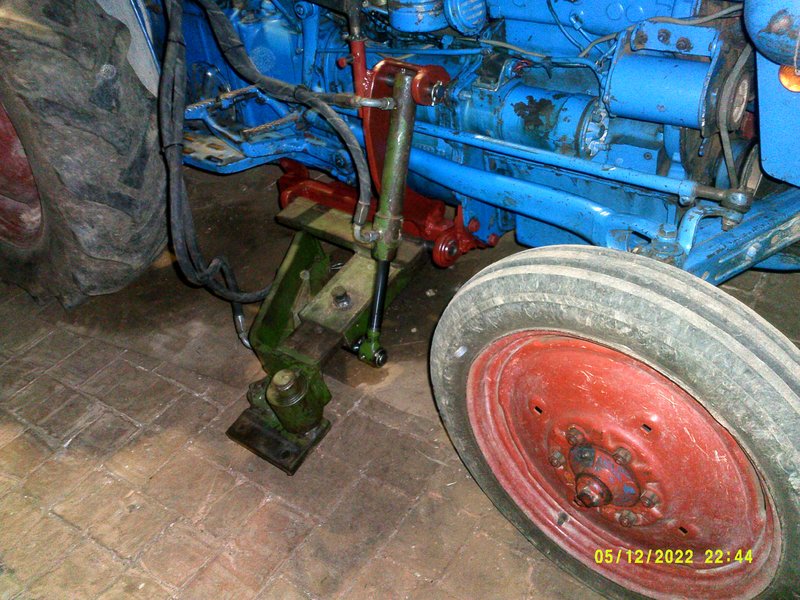 This now forms a workable unit that stays on when we're doing this job. The mouldboard goes on and off as otherwise getting into the barn is a tight squeeze.
Now out of the barn and ready for work. 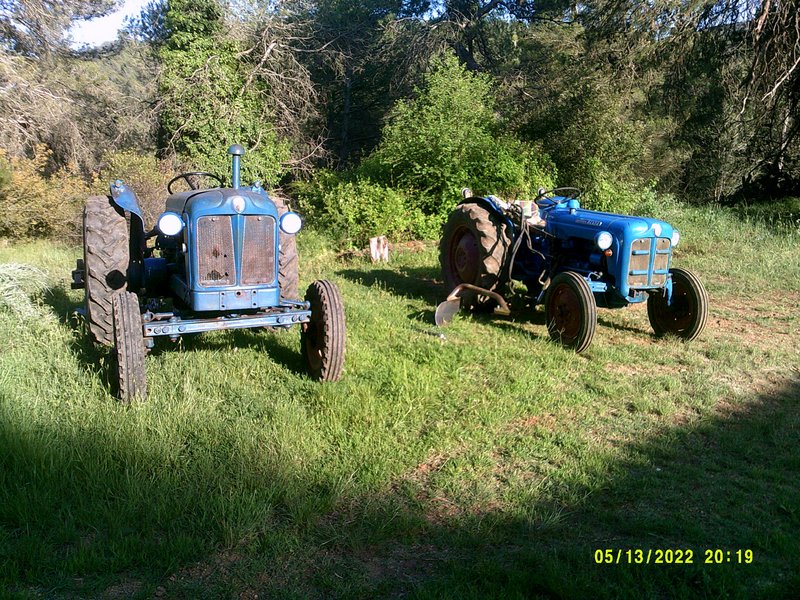 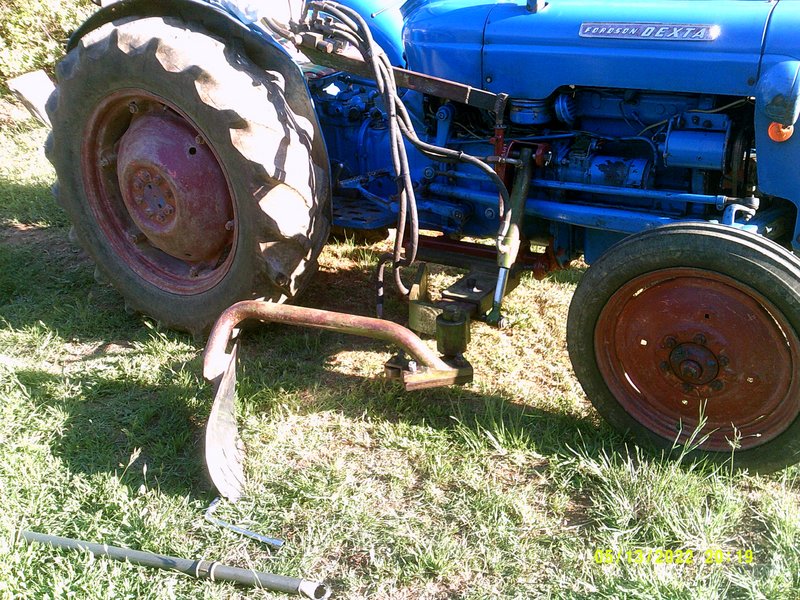 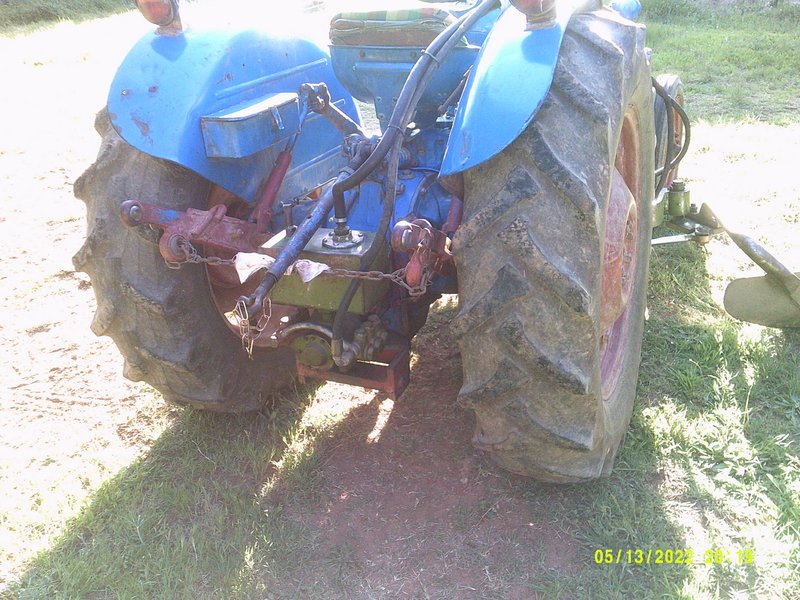 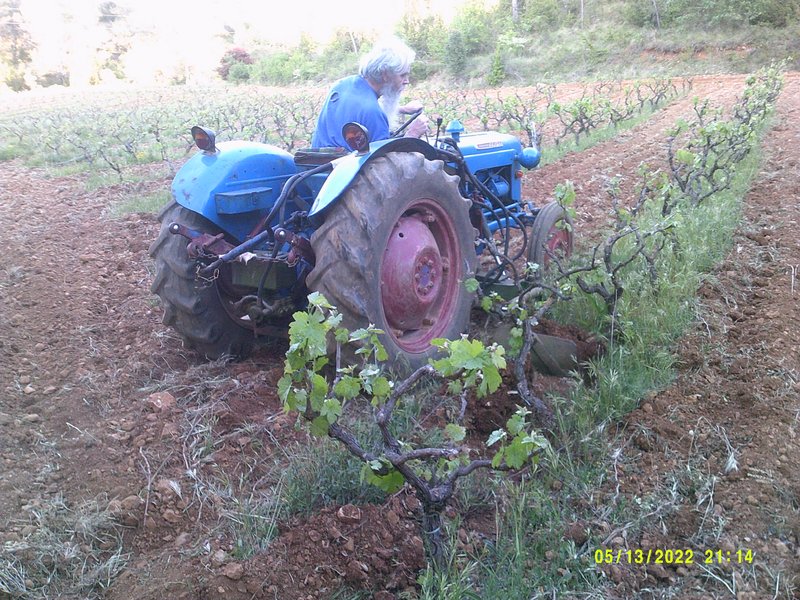 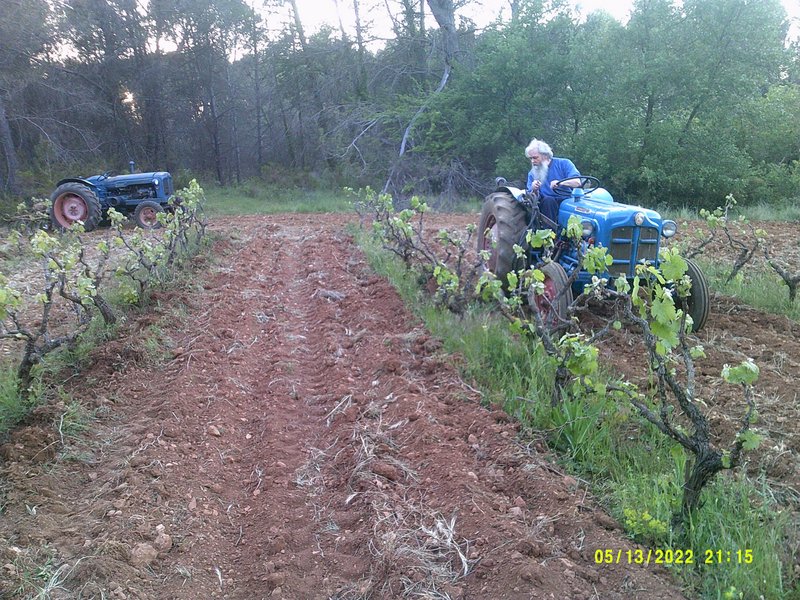 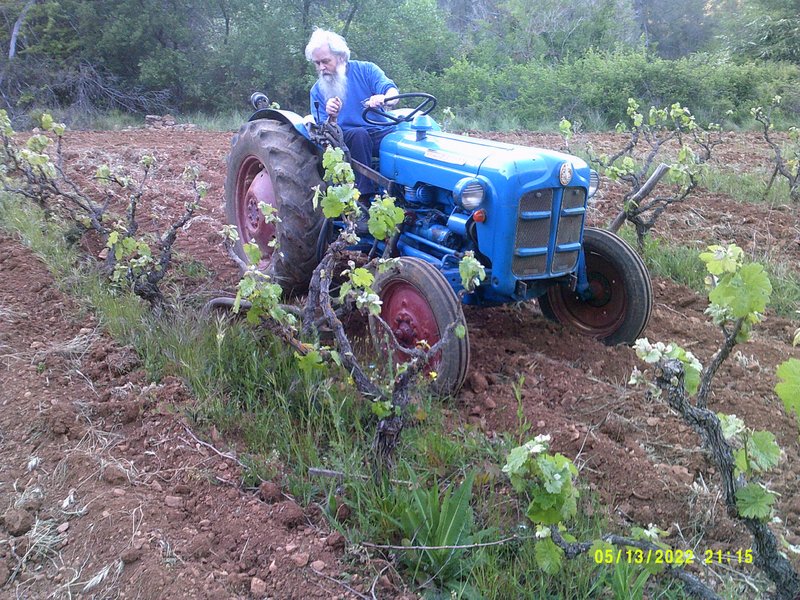 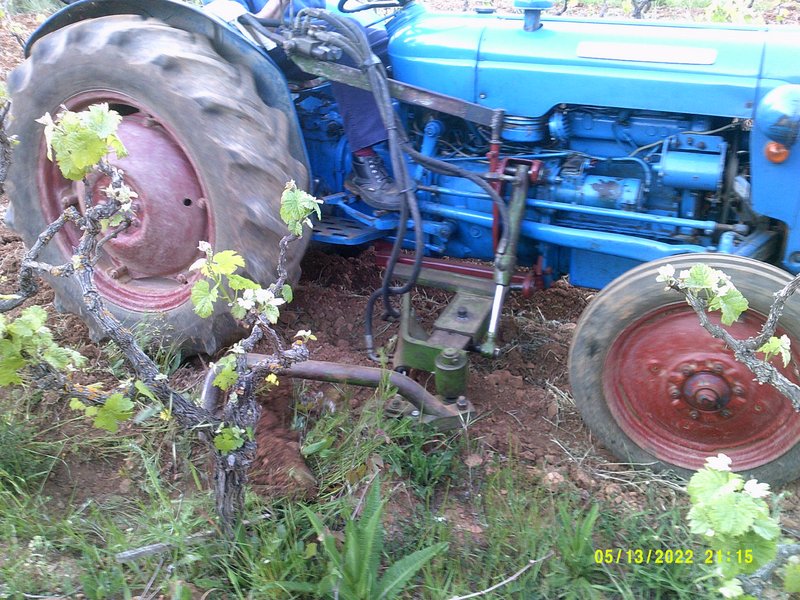 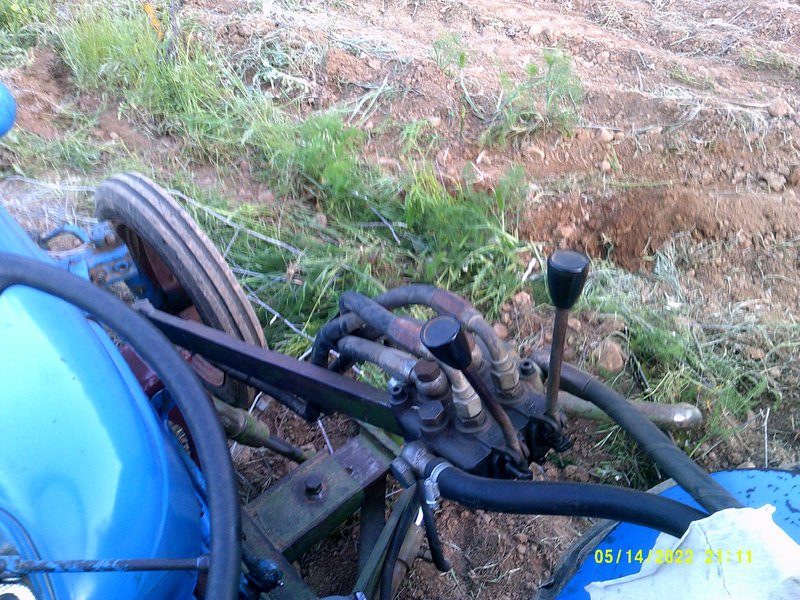 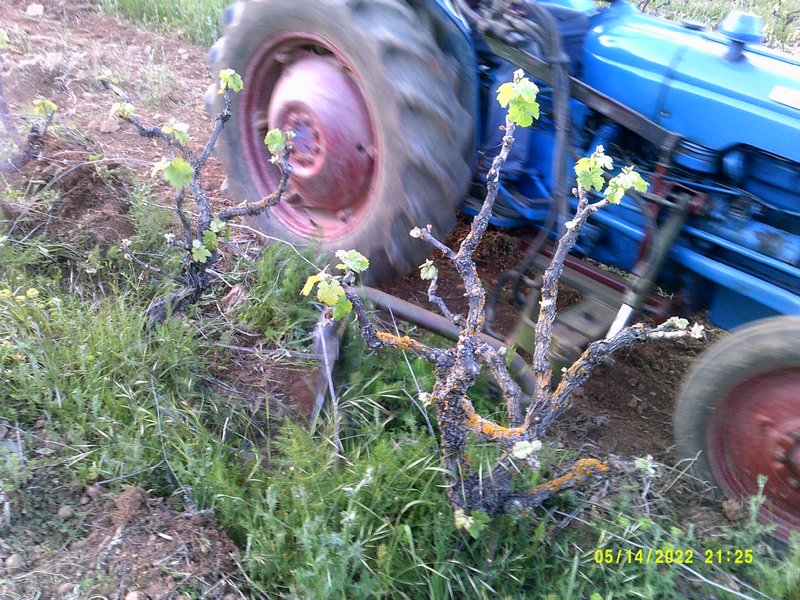 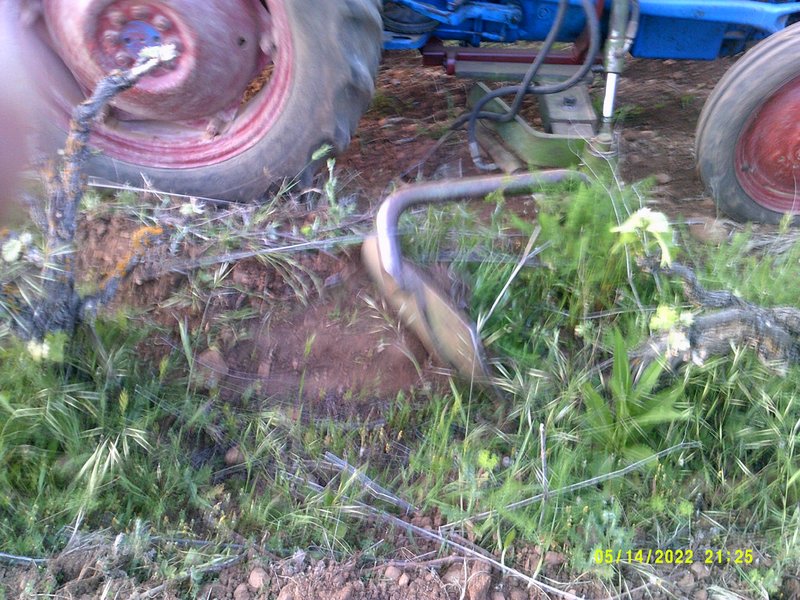 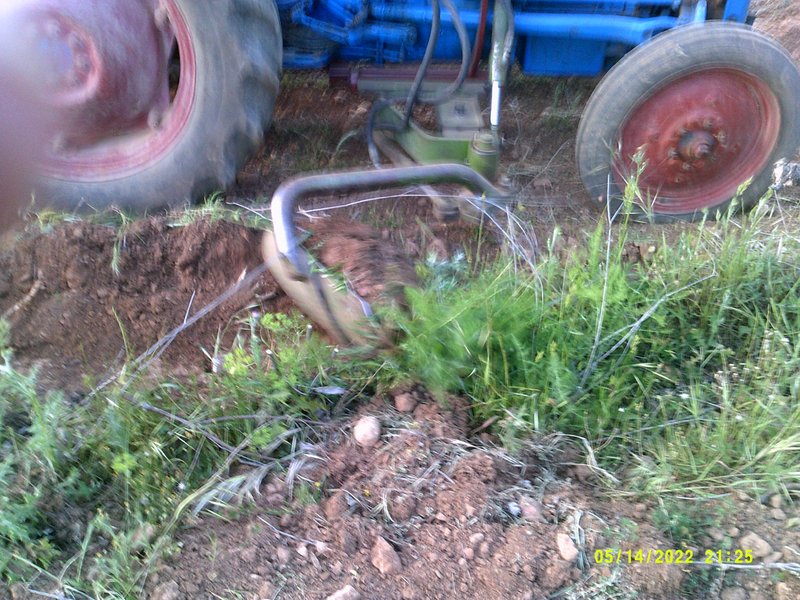 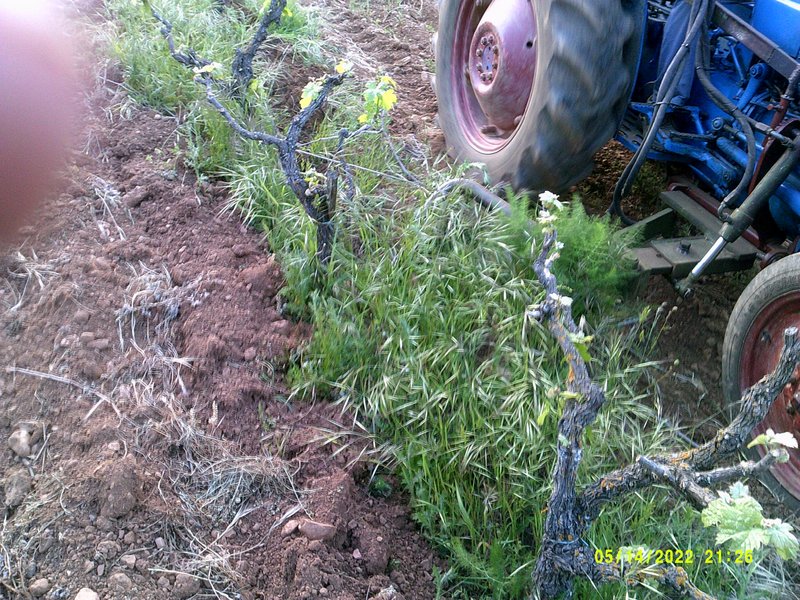 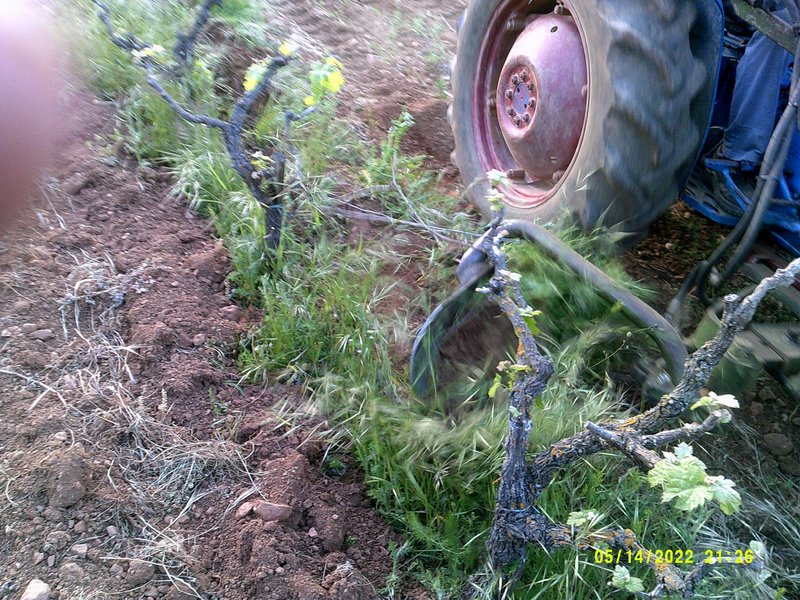 As you can probably imagine, you have to be careful not to dig up vines.
Sandy

Cracking bit of engineering there Sandy, very impressive!
My biggest fear is that when i die my wife will sell my tractors for what i told her they cost
Top

J Bargans (a local implement manufacturer) had these as one of their main implements in their range together with the more usual trailers and cultivators. Their implements are some of the best that are based on std. rolled steel parts welded up, and very common in our area.
Sandy

Very interesting, what grape variety is that and where are you ?
I'm working in the industry here in NZ but on an industrial scale without the care and craft level you are likely to have.
Do you make your own wine?
you know it's a classic when people stop to watch.
Top

We have Merlot, and the vines are only slightly younger than myself. We do make our own wine, last year was the first time after a 4 year hiatus because of lack of time and disease. Do you have any interceps in NZ?
Your Dexta must be busy on the vines!
Sandy

No Interceps that I know of here, we use the green tractor variety on the whole - largely a result of needing high hydraulic oil flow rates from 3 outlets to drive machinery - Quantum mist 3 row sprayers, Hydralada trimmers and Collard leaf pluckers to name a few.
The Dexta gets to do the jobs around the home 30 acres next to one of the vineyards, sure know which I prefer to drive and it's blue!
you know it's a classic when people stop to watch.
Top

You might have noticed that our row spacing is quite a bit more than usual, this is to allow Billy through when ploughing and to compensate for a not very skilled driver on him as was our case when the vines were planted.
Sandy

Very interesting!
We have a variety of 3m to 2.4m row spacings - the newer blocks being the narrower and all grown on trellis. Pruning season now so we have hundreds of Ni-Vanuatu workers around the district, we have one crew of 10 presently but that will double in a fortnight and looking to be complete that job by end July.
you know it's a classic when people stop to watch.
Top

I know the feeling, we tend to leave our pruning late and we're very slow which ends up meaning we have a scramble to finish as we only end up getting a month or so for ploughing with Billy before the vine shoots get too long for him to get through.
Sandy