Hi all,
Many years ago we got our half Super Major, at the same time we also got this MF loader, a 702 on I think a 205x. They were both brought on the same lorry, and the MF got parked under the pine tree, where Billy had sat many years earlier, and was basically left to when we had time. Some of you might have seen it before, but here are some not great pics if you haven't seen it. 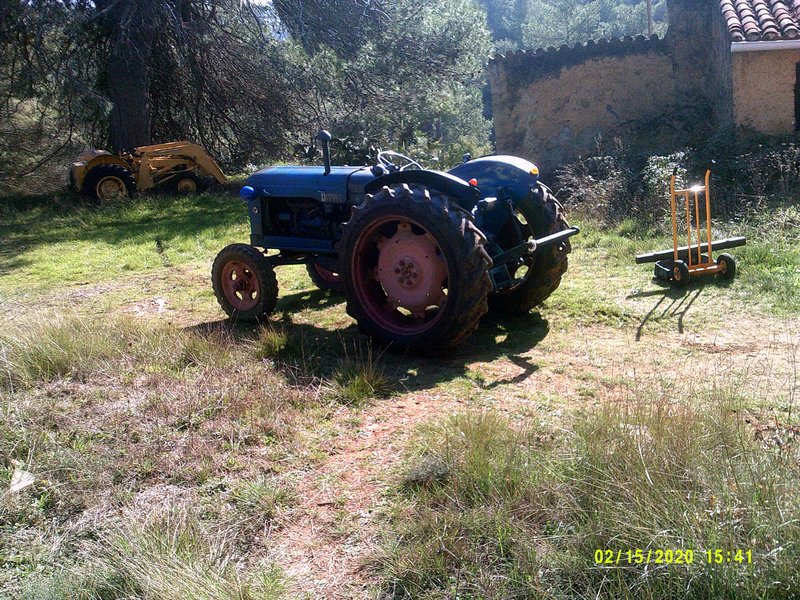 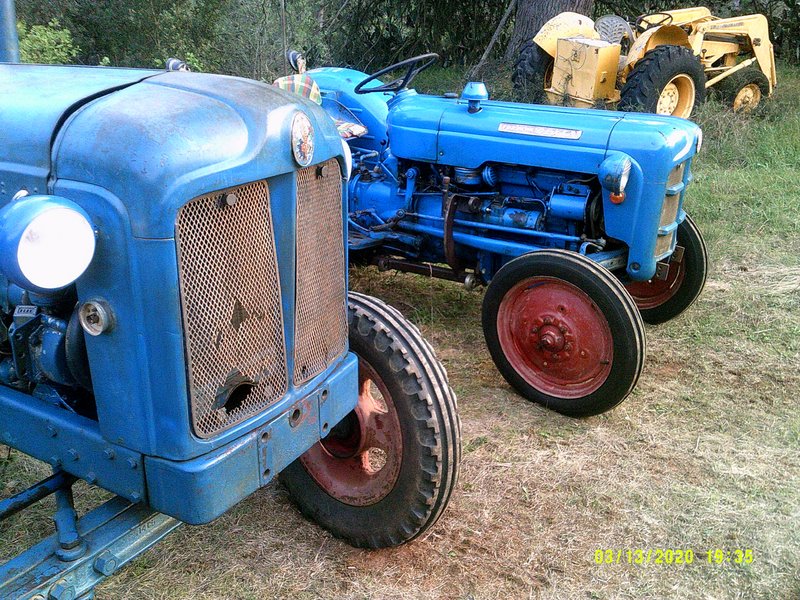 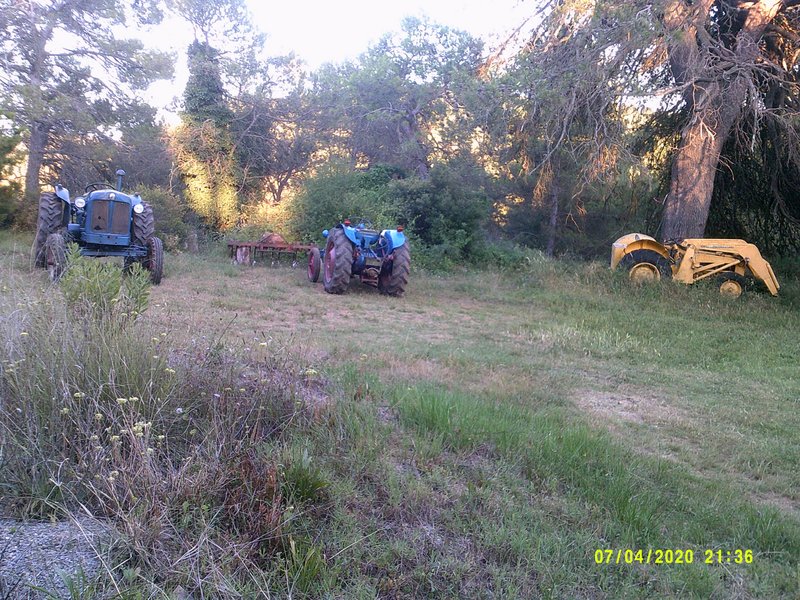 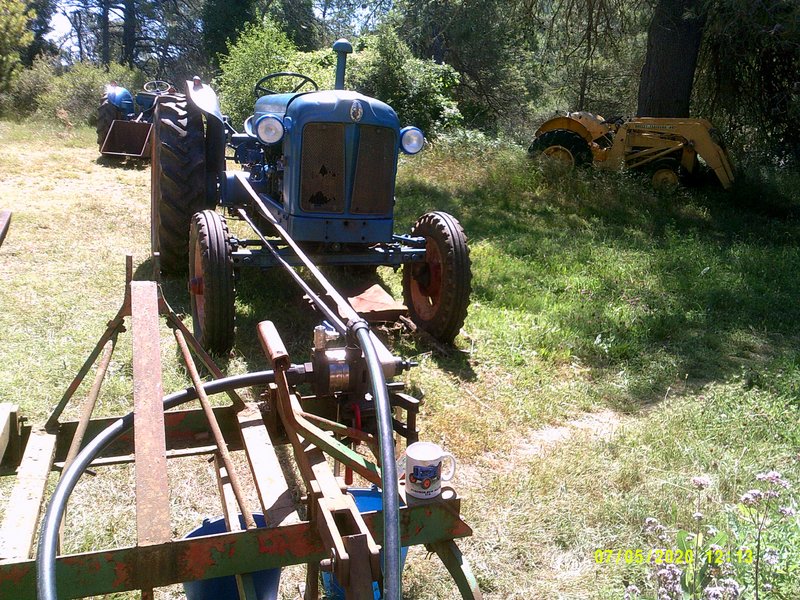 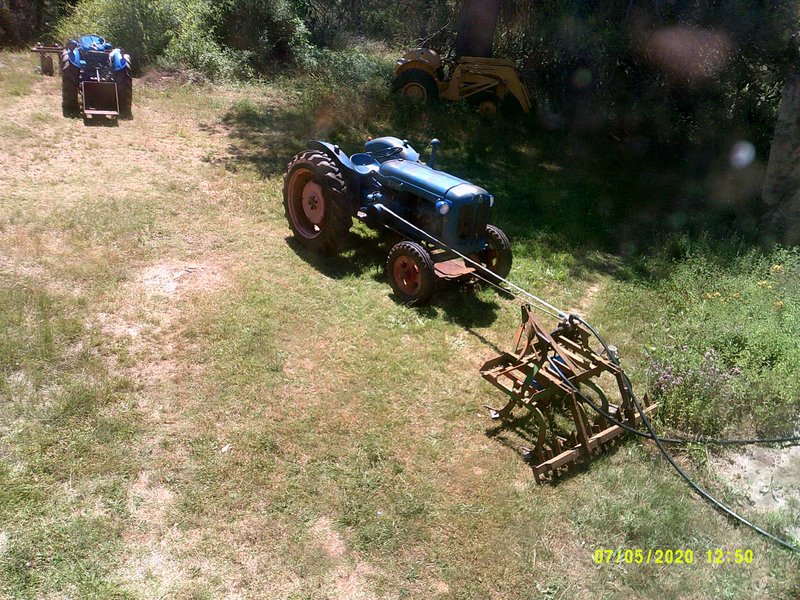 Nearly a week ago we finally moved it out of there to look for bits we lost there years ago, Billy doing it all of course. 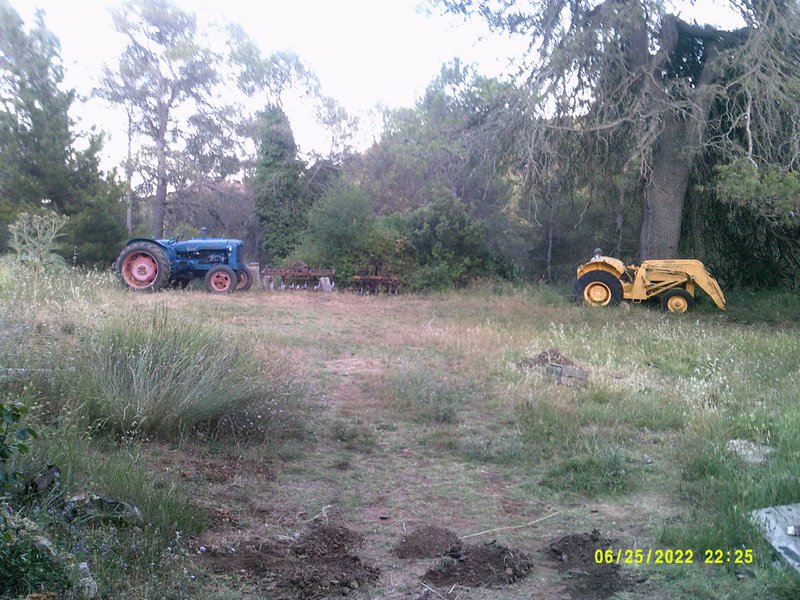 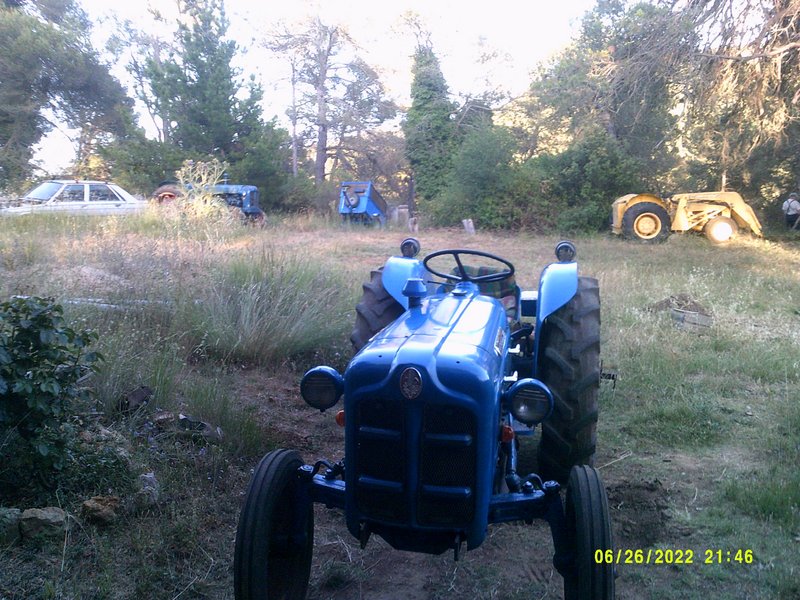 We then decided to start it (the engine was supposed to be a runner, but we never tried to start it thinking we could manage to fix the torque converter fairly soon after Super Billy, back at the time we thought this would be quick), but after ages in the weather things aren't as healthy as they might have been, with the exhaust manifold having been left off (it was already off when we got it), uncovered intake manifold and other bits that don't like the weather exposed. Thankfully the oily areas look as if time has stood still, which brings me to the question: thinking the cylinders will need freeing up, we decided to look in through the injector holes, but the injectors are solid on (even after lots of diesel was poured on days ago), and the engine manual doesn't give any clues on how to avoid damage with them being so solid. Does anyone here who is familiar with the Perkins AD3.152 have a good idea on how to do this? I must say I'm really missing the ease of access and simple layout of a Major that I'm so used to normally, but even Davie seems easy next to this MF, and I often think of Davie being dificult to work on because everything is so close to everything else!
Sandy

Hi Sandy, having worked on older JCBs i know what a pain it is trying to work round/over the loader arms. I think I would remove the head to get better access to the injectors, if the manifolds have been off there is a good chance the valves will need attention anyway. If you can remove the 2 studs on each injector you can use a big spanner on the bottom of the injector on the lugs to try and turn them a bit (just don't go mad and break them!) this will help free them up. Soak them with a good penetrating oil beforehand, it will get in there better than diesel. The alternative is to use an injector slide hammer but I appreciate its something you may never use again if you have to buy one.
My biggest fear is that when i die my wife will sell my tractors for what i told her they cost
Top

Thanks John. As we'll have to fix the torque converter anyway we decided to remove the loader to improve access, it's nearly off now but we're a bit busy with water for the garden already, so this will be waiting for a bit. Pics will come soon. We're hoping to confirm where there might be water looking through the injector holes, I did have a quick peak in to find only valve no. 6 open, so the others shouldn't be too bad; we might need to test the no. 3 injector in which case we'll probably reset all three pressures while we're at it. Once we've run the engine we'll probably regrind the valves and maybe go further, but we'll see when we get there. Once the injectors are off taking the head off should be straightforward, as the area under the rocker cover gives no hint of water in it. We'll see if we can get the injectors to turn once the loader is totally off, I do miss being able to use the Major injector lifting bar, although we don't even have one! One of the main problems we have on this MF is a huge list of missing parts, which I don't think we're quite fully aware of yet as there are all sorts of things we can't find that should have been on it (no radiator or fuel filters for example). But we'll get to it when we have time, so we'll probably end up taking ages as with Super Billy!
Sandy

Here is the MF before we removed anything, we fitted the exhaust and covered the intake hose connection to keep dirt out, then tried to shift the injectors before first posting about it. 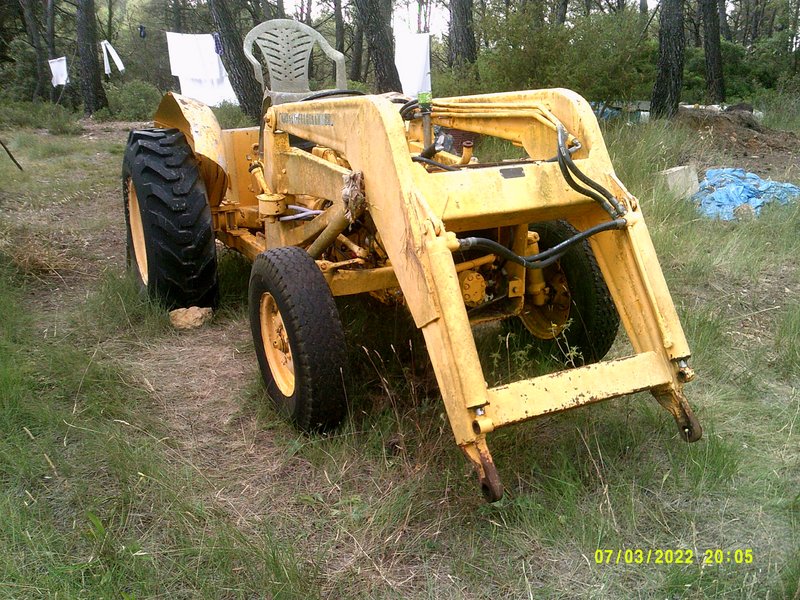 The chair over the seat is to keep resin off the seat. The seat came with the half Super Major. 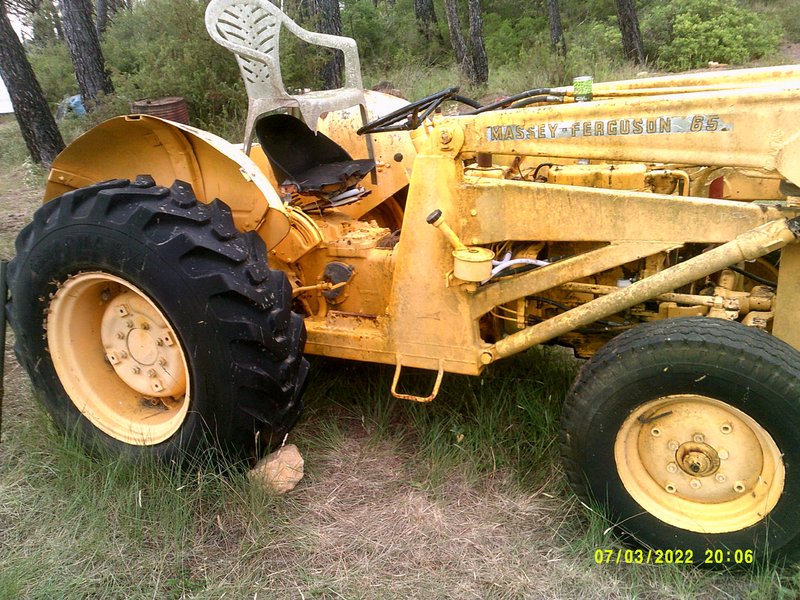 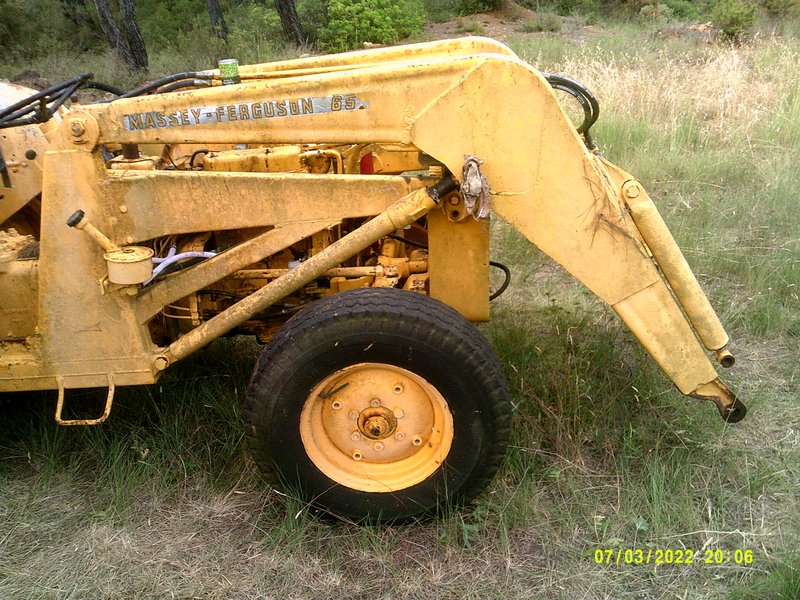 The jack is a prelude of things to come. 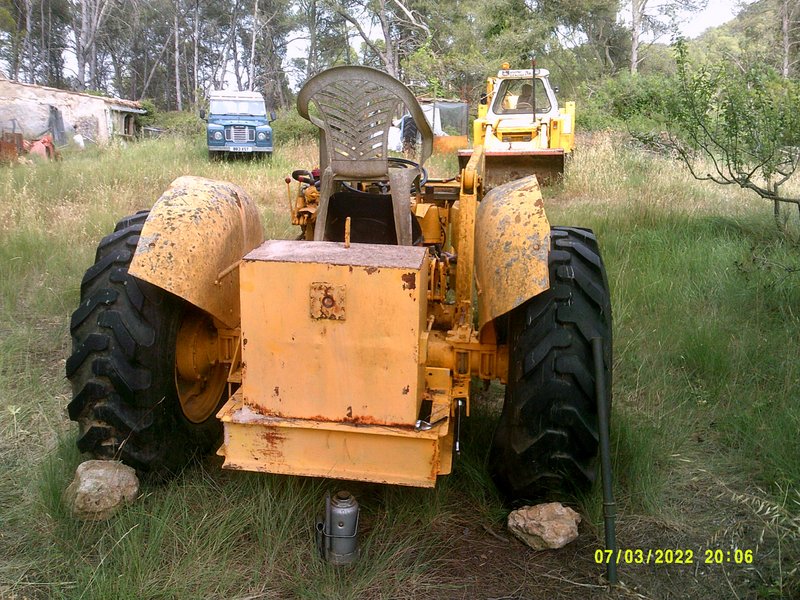 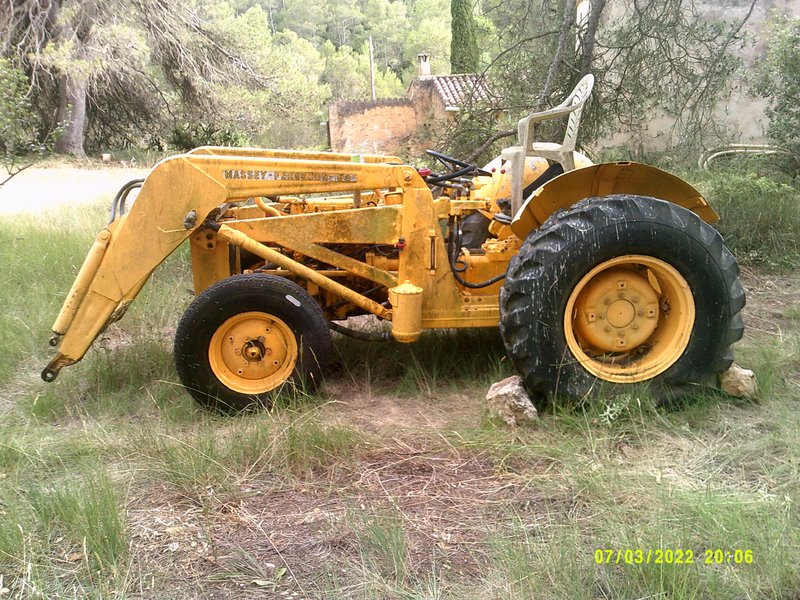 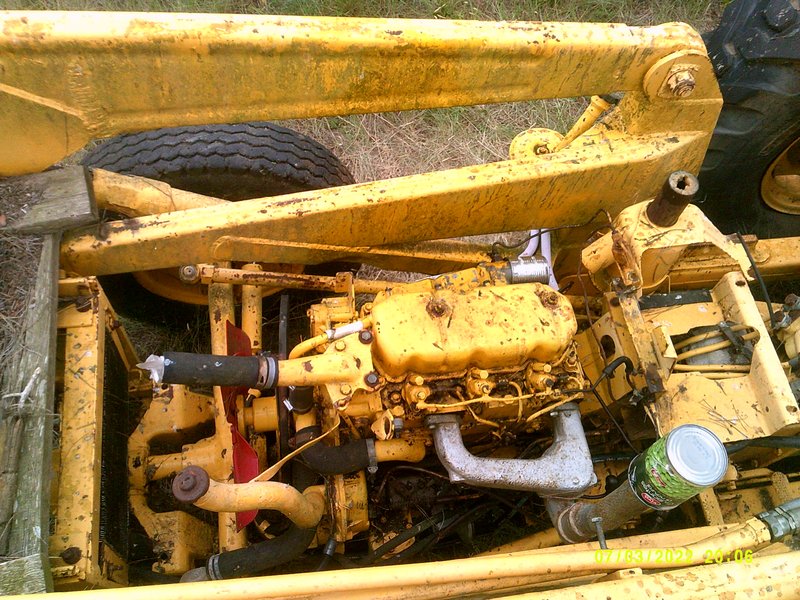 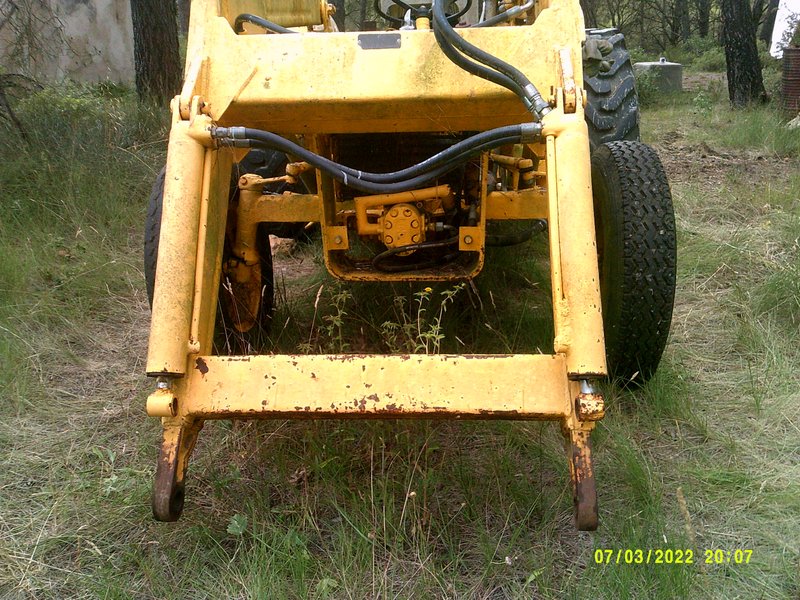 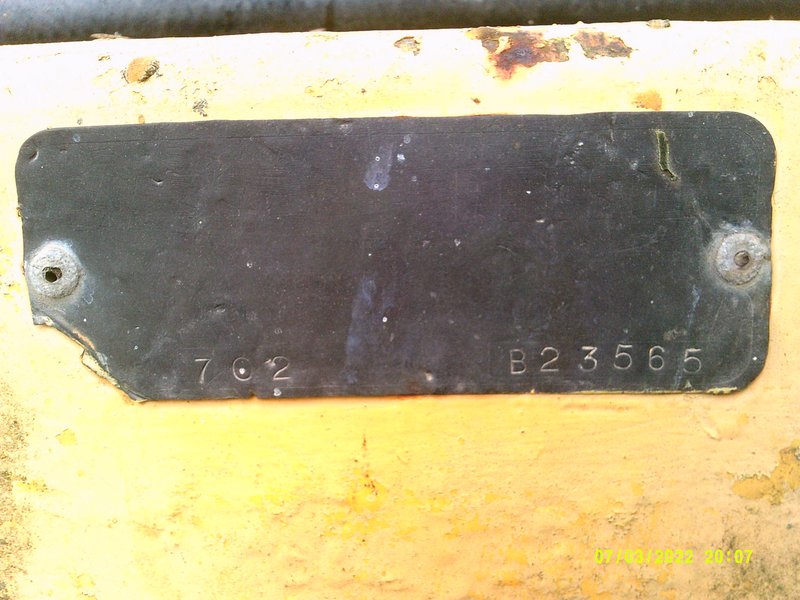 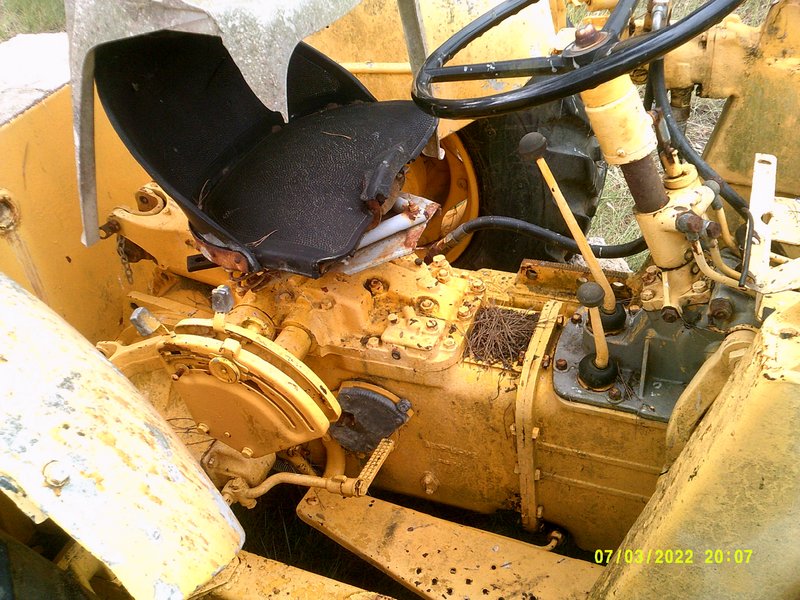 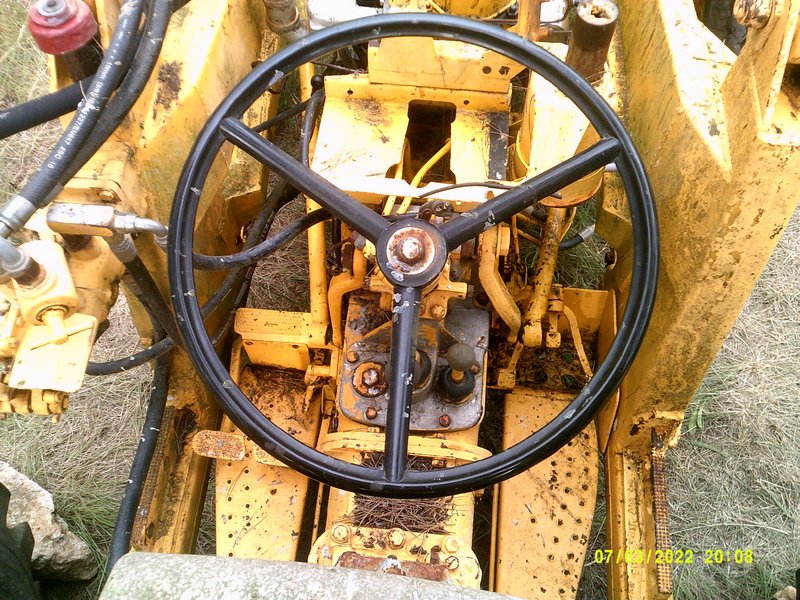 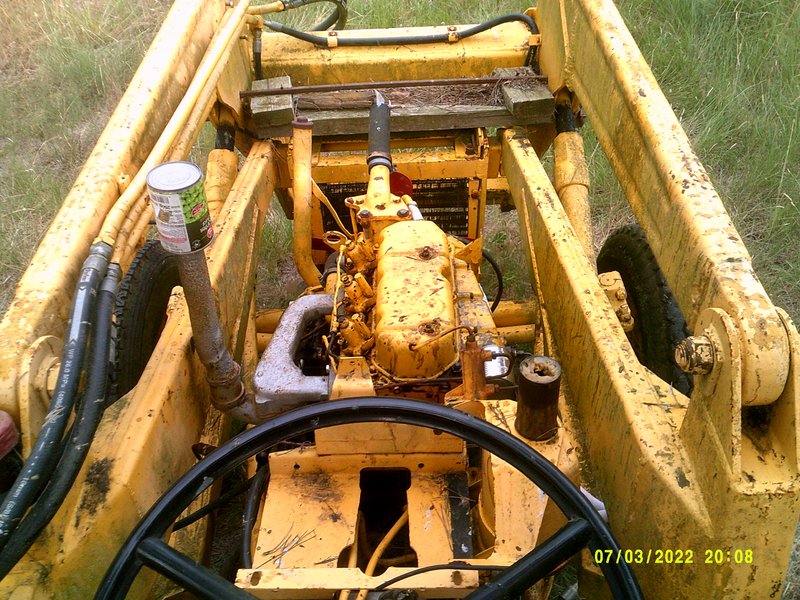 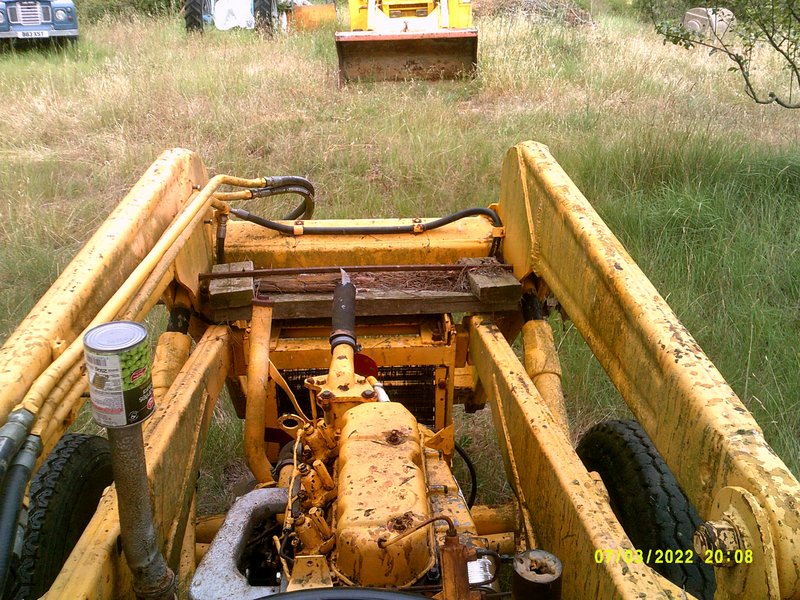 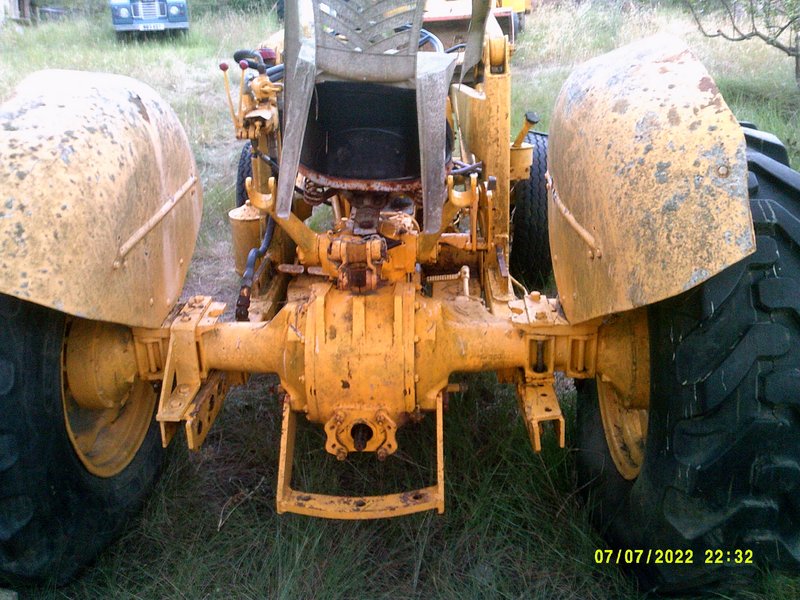 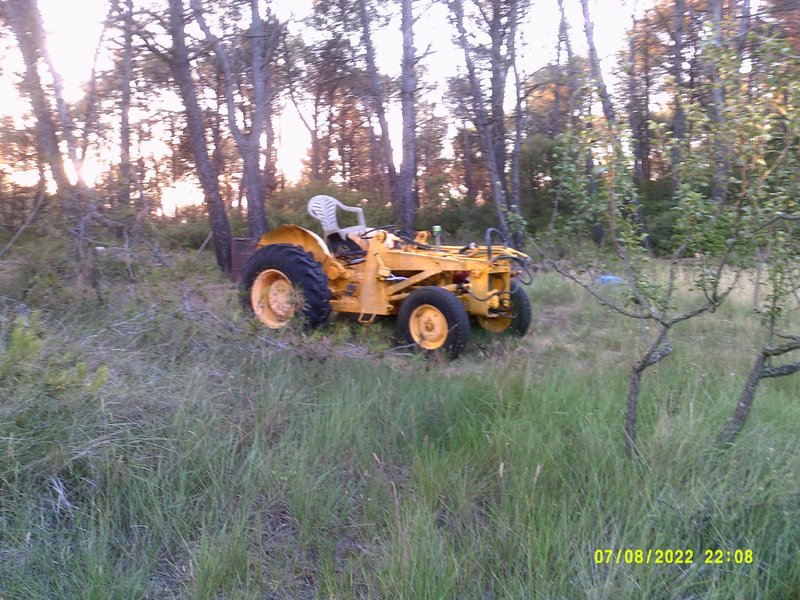 Mr MacGregor holding the loader before putting it where it is now. 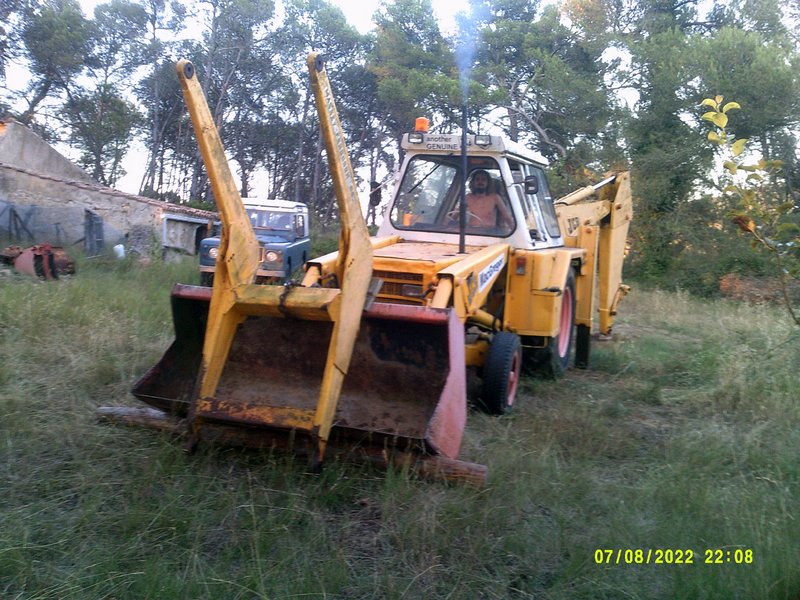 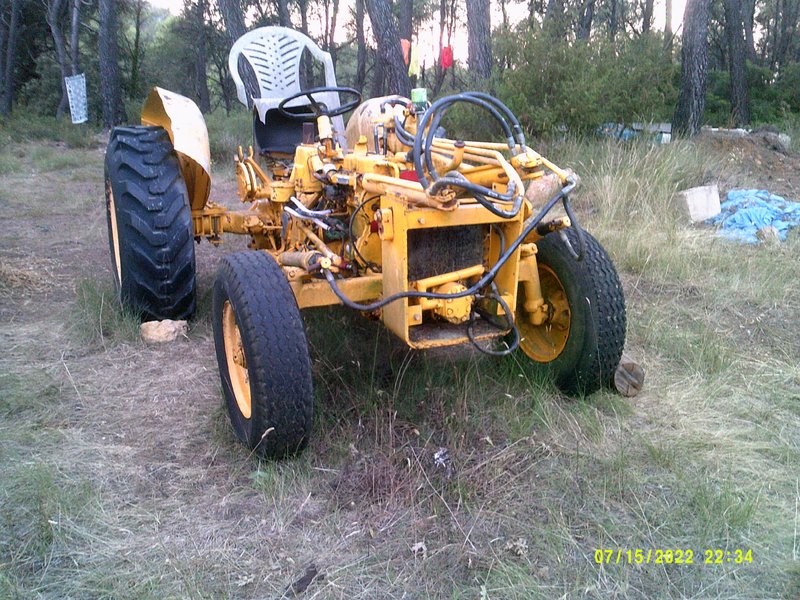 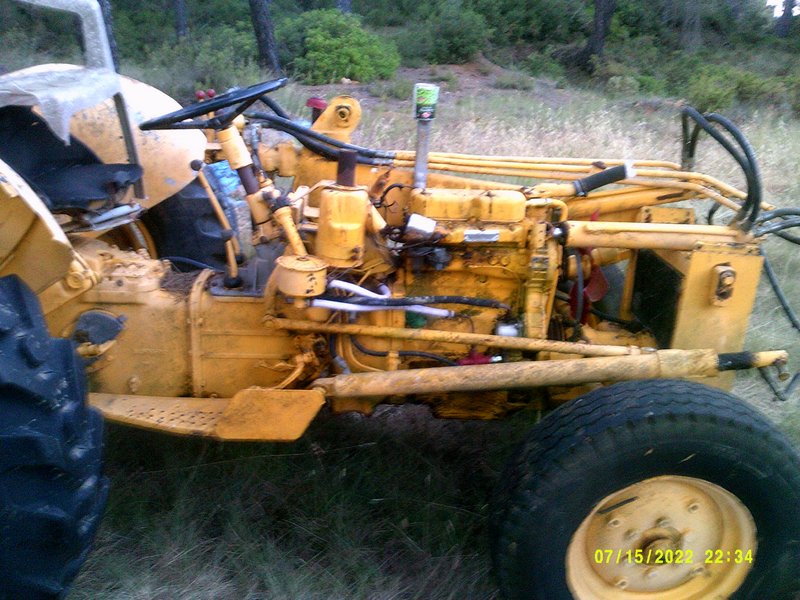 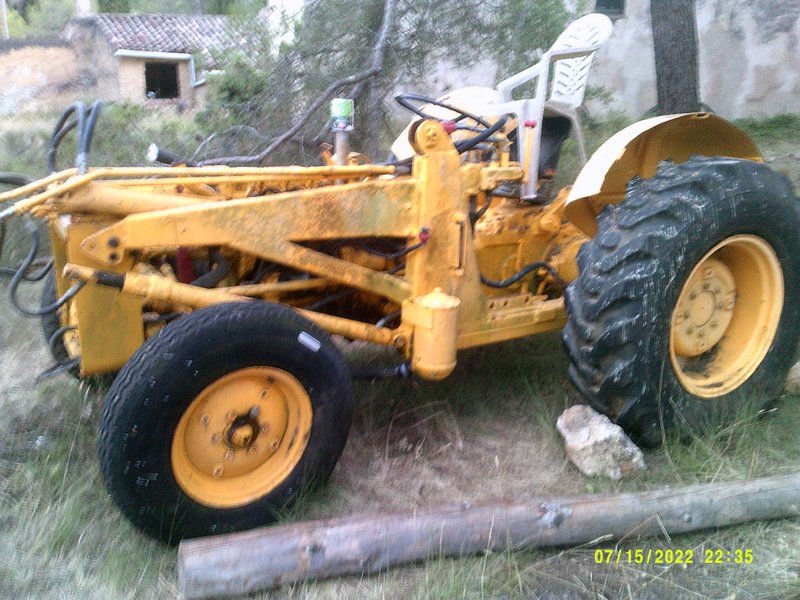 The only other bits we have are the fuel tank and fan cowl.
Sandy

Looks in good shape externally. Can you get hold of the missing bits easily?
My biggest fear is that when i die my wife will sell my tractors for what i told her they cost
Top

We haven't tried yet, I hope we can get some of them easily, but we could find ourselves needing to find things very far away, but for now we've got plenty to do as it is, all of the missing bits will be relevant once the engine is running and the torque converter is fixed.
Sandy