A few days ago we suddenly decided to see if we could recover some of the old batteries we have (one could well have been sold in the early nineties!). We started with this one out of our half Super Major, which is quite old, having sat out in the weather for about 12 years and been out of use in that Super Major for quite a time before we got it. It read 0.68V, but after charging for quite a few days (not overnight) it now reads some 12.46V, although we're going to give it a good bit longer and overnight. 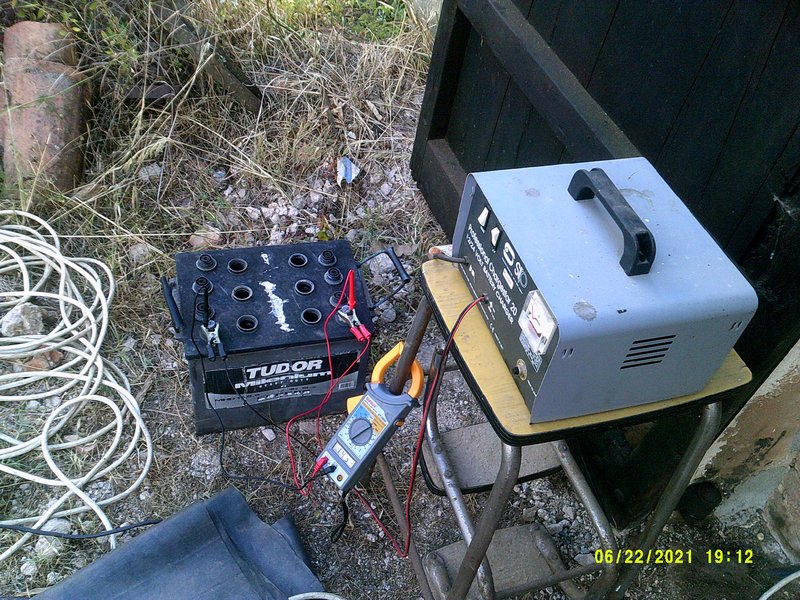 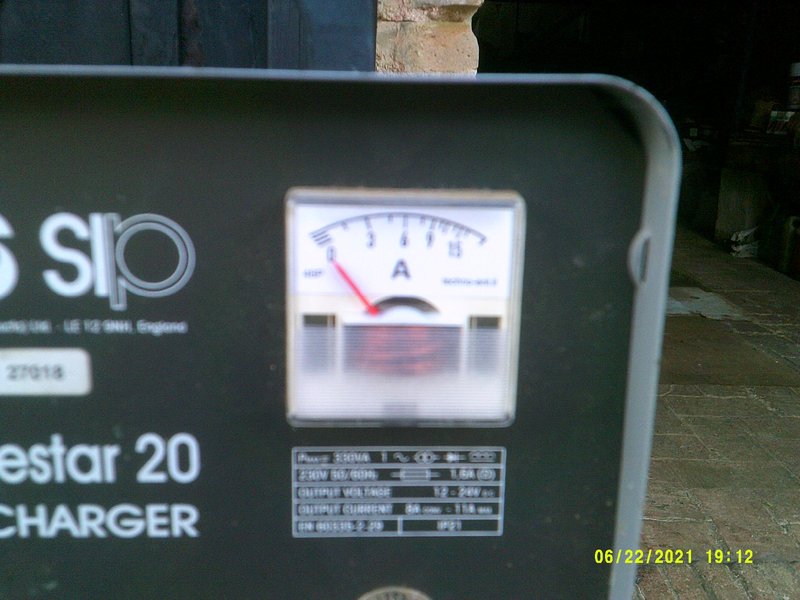 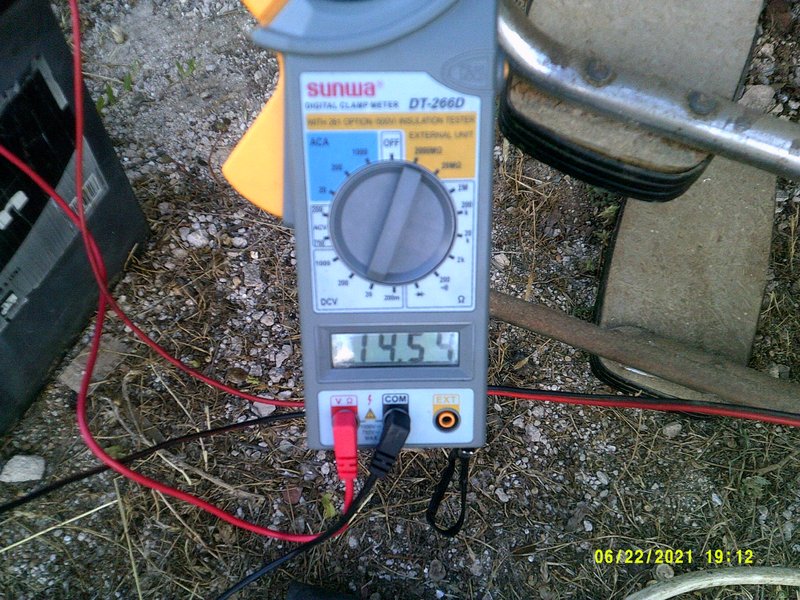 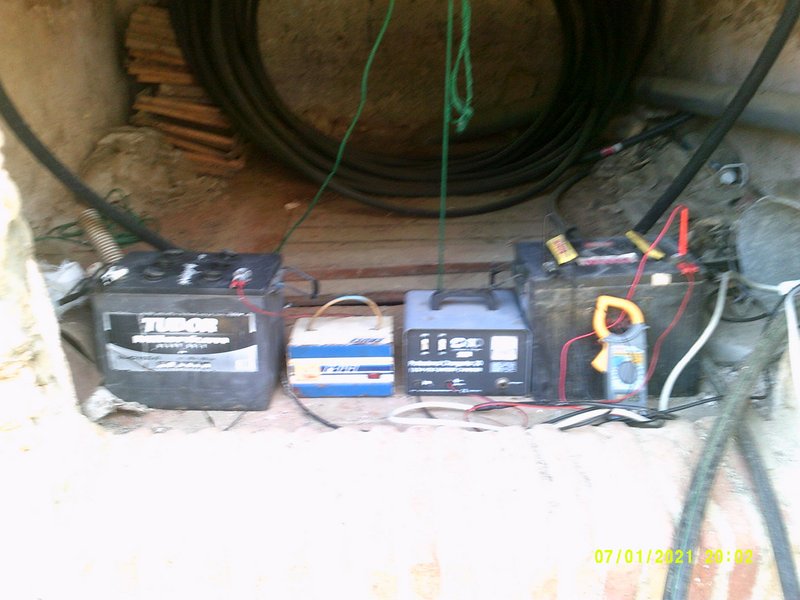 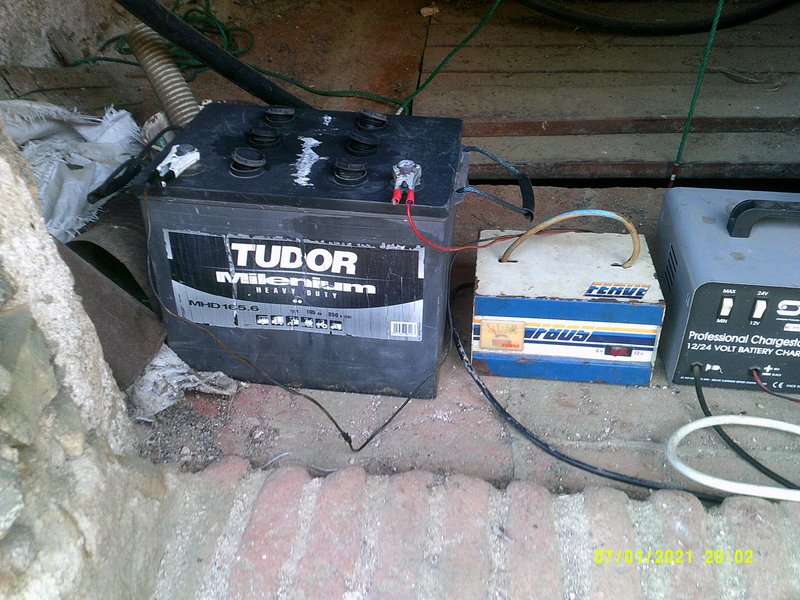 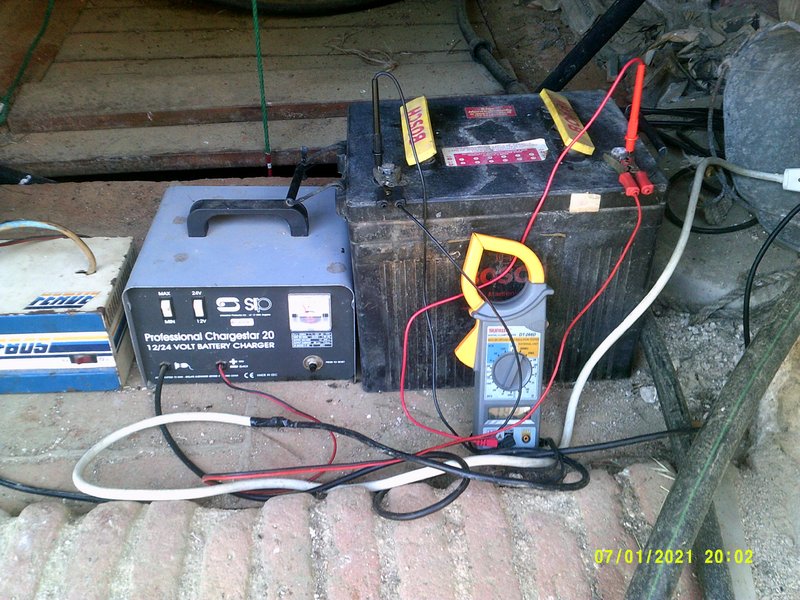 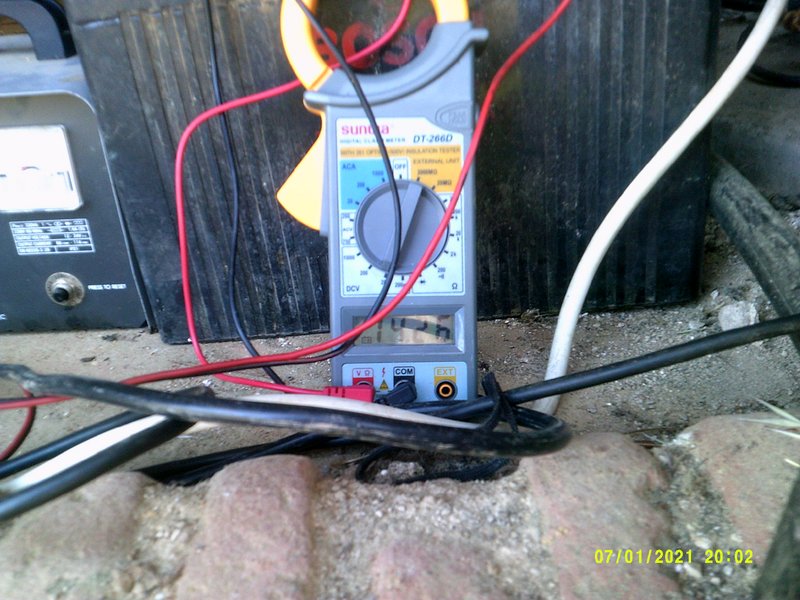 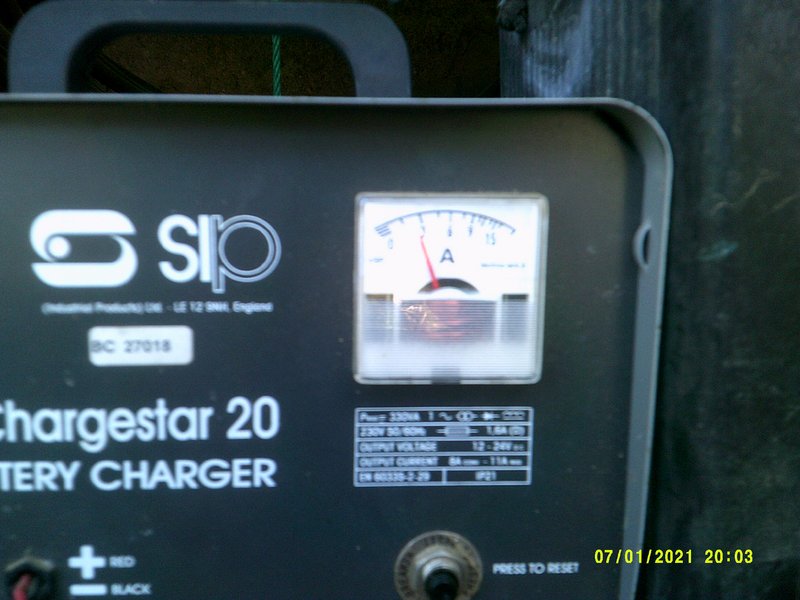 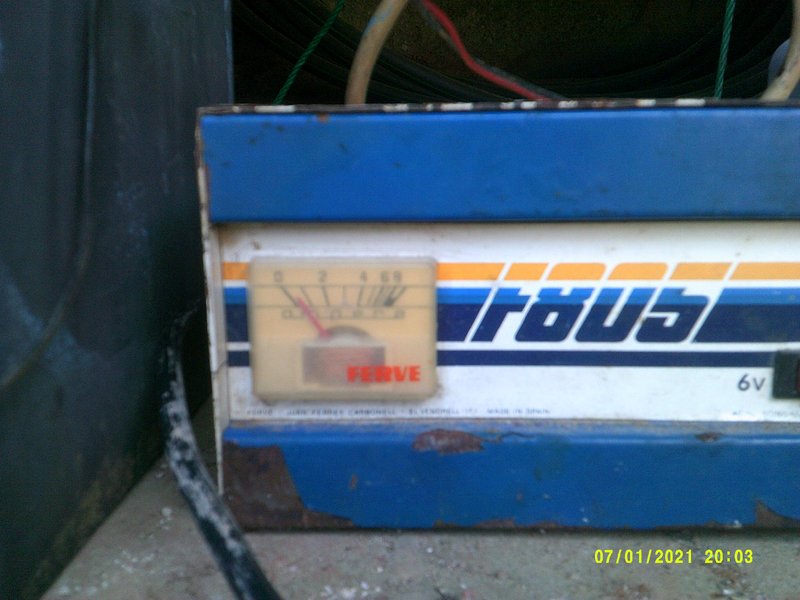 The second battery went on when we recovered the beautiful old charger that had been forgotten about for ages (this one is a local one, made at a place only 20 miles away); and this battery would have been used by Billy well before we got here. It read 0.77V before charging. The large white one was Billy's from 2005 to 2010, when we tried to recover it but it didn't really work, we eventually dumped it in the barn dry. It reads aprox. 5V. 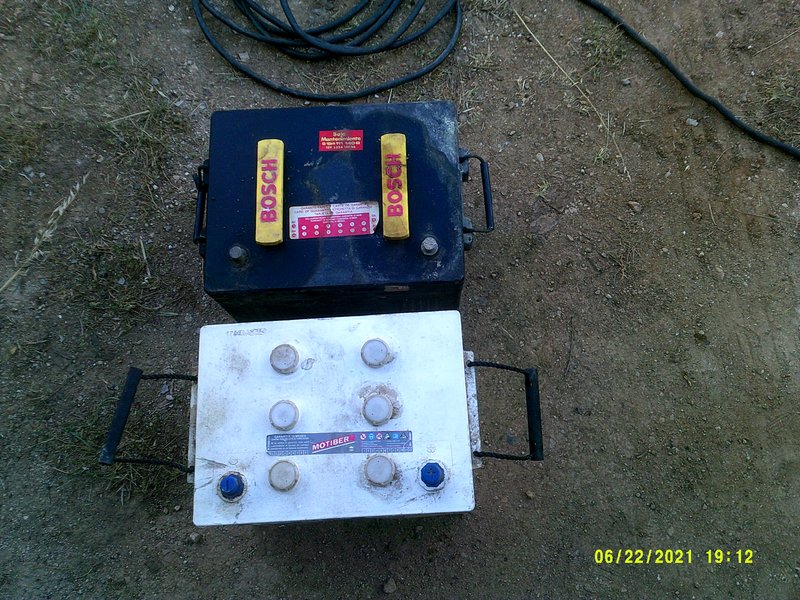 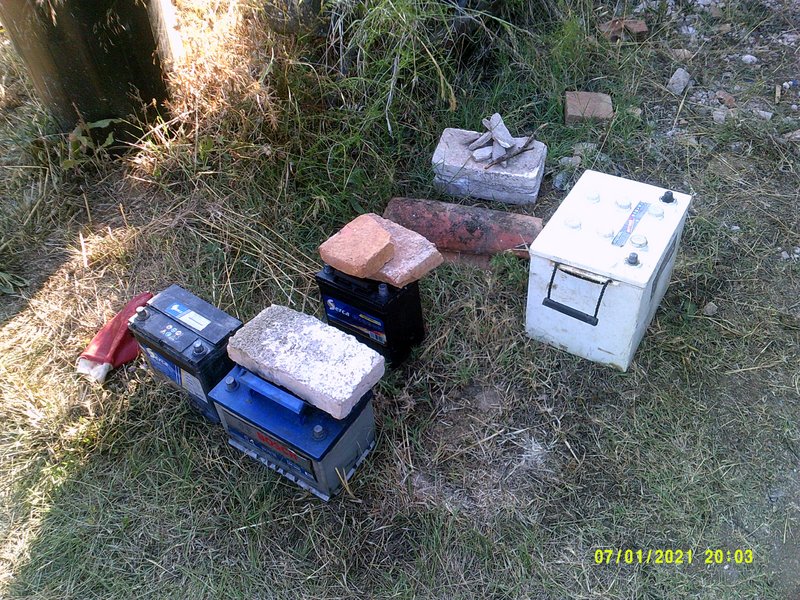 The other fairly large one was the brilliant one that our Land-Rover Kenny had until a couple of years ago when it died (it read 5V then, but it now reads 9V). Since then Kenny has needed borrowed batteries, but he's now got a fuel leak again and we need a new seal before we can run him again. The two wee ones (one reads 3V and the other 5V) are for our Renault 4 car and van that also need urgent cover to combat corrosion attacks in the floor.
We have no idea if this will end up being successful, but it seems silly not to try it especially with the shortage we have at the moment of good ones and the large collection of old ones we have in the barn (we've got more than twice the ones mentioned that died at some point!).
Any advice welcome!
Sandy

https://www.google.com/url?sa=t&source= ... bG__kLTLqn
My biggest fear is that when i die my wife will sell my tractors for what i told her they cost
Top

Never tried this but keen to know if it works!
My biggest fear is that when i die my wife will sell my tractors for what i told her they cost
Top

We tried the Epsom salts in the large white battery, but we probably didn't clean it properly because it didn't work. We'll try it again though, as it might work if we clean it properly, but we'll charge them first to see how gone they are to start with.
Sandy

I just connected up the Hurricane starter (pic coming, used the three leads and solenoid from the half Super Major, operating the solenoid manually and not moving the engaging lever) to the two batteries that were charging, the half Super Major one did virtually nothing (I think we need fresh electrolyte in), but the old one survived about seven consecutive start attempts, each lasting about 0.5 seconds and it kept its voltage! I think Billy's long awaited new battery is an old one he used over 25 years ago! All of this after a six day continuous charge.
Sandy

Here's a pic of the arrangement awaiting the next battery (note similarly bad insulation on this starter lead compared to Billy's one). 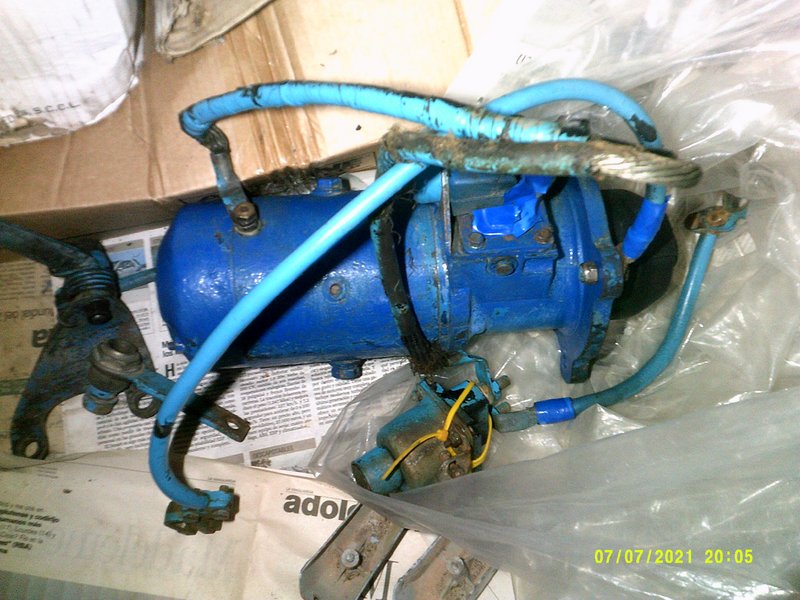 Billy26F5 wrote: ↑
Wed Jul 07, 2021 6:06 pm
the old one survived about seven consecutive start attempts, each lasting about 0.5 seconds and it kept its voltage! I think Billy's long awaited new battery is an old one he used over 25 years ago!

The old battery is on and works 25+ years later! It has been on the charger for much longer than intended, but it survived four starting attempts today (two false ones because the poles are not as clean as they might be), we'll see if it can start Billy again tomorrow.
The half Super Major one's electrolyte has become more competent just from sitting, as I dropped some on a brick (it was coming out of the cell cover) and it reacted quickly, when it had been leaking out while charging and not bothering the bricks beneath it at all. The three car batteries are needing attention (the Kenny one definitely needs a flush, the Renault 4 ones I think need more charging) and I halled out another few that will do Mr. MacGregor and Davie that I haven't got to yet.
Sandy

Here's the battery in, with the rare (I think, this is the only one I know of except another one which we also have for Super Billy) battery clamp tightened down. One of the rods is lost but I think it's here hiding somewhere. The battery is performing very well considering its age (25+ years old). 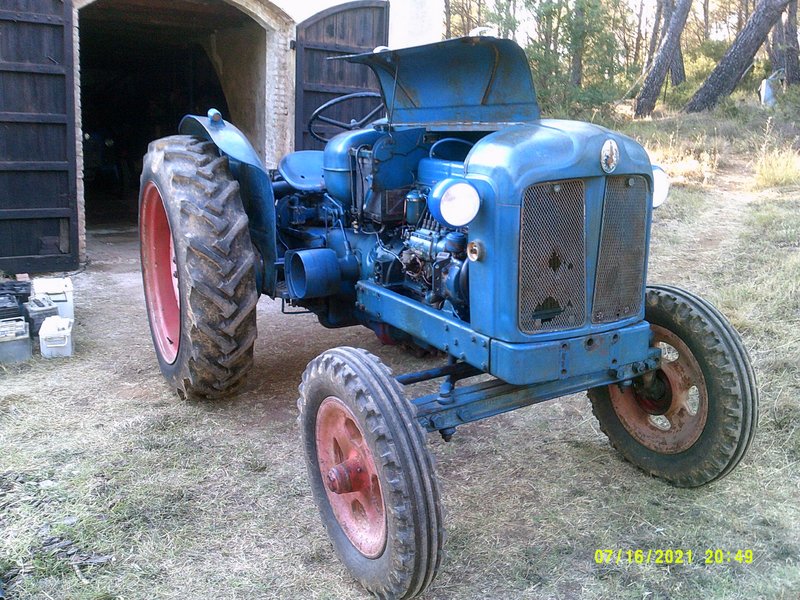 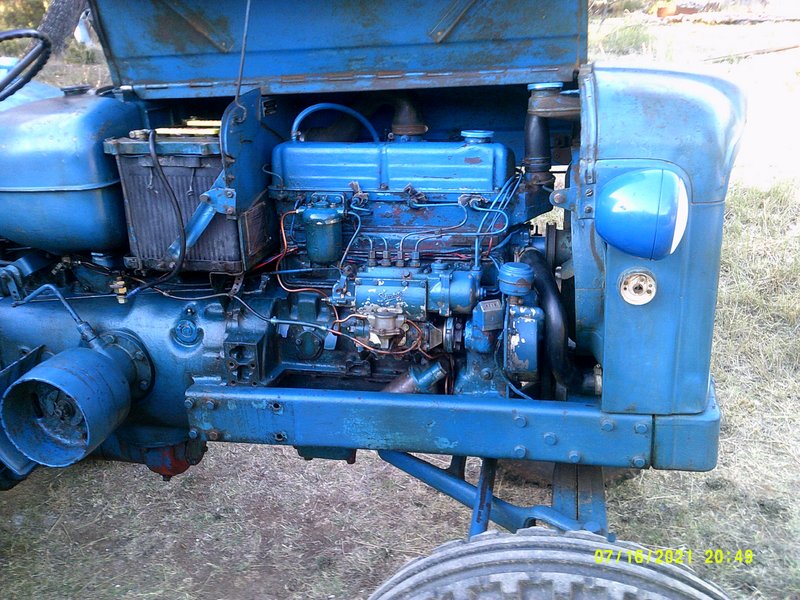 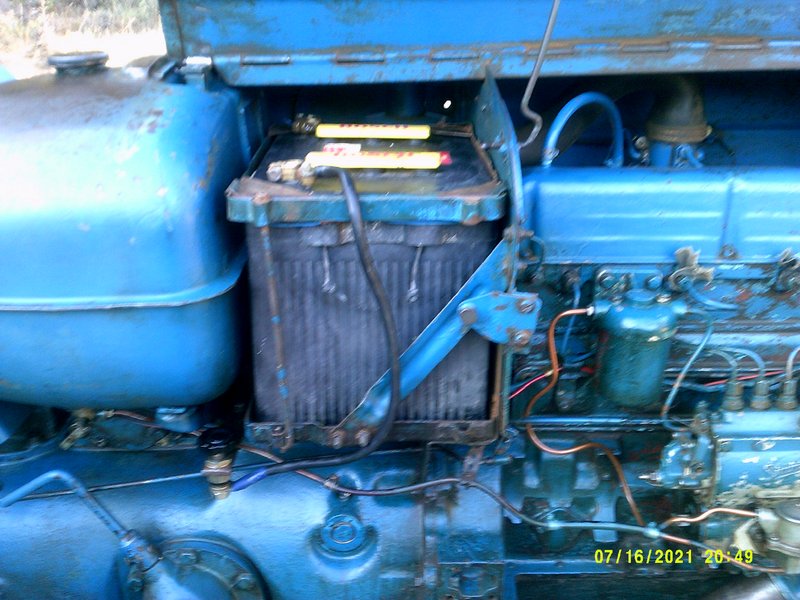 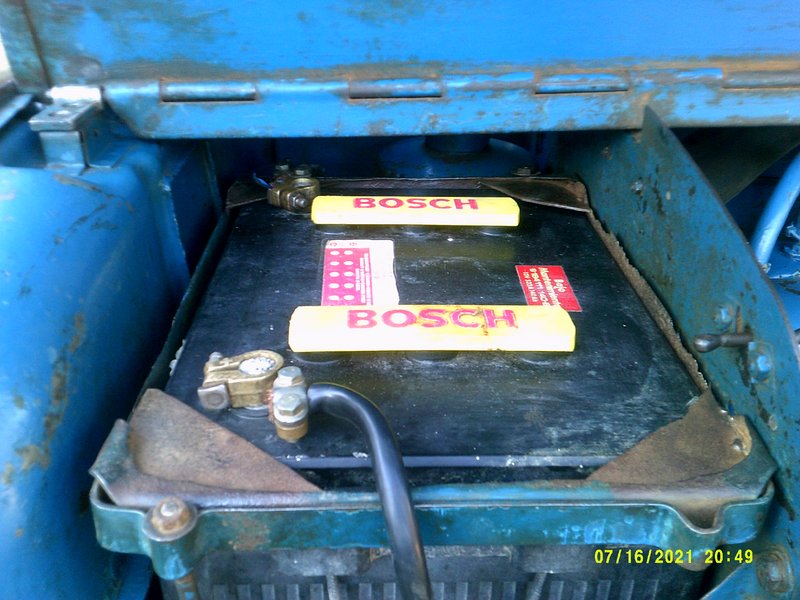 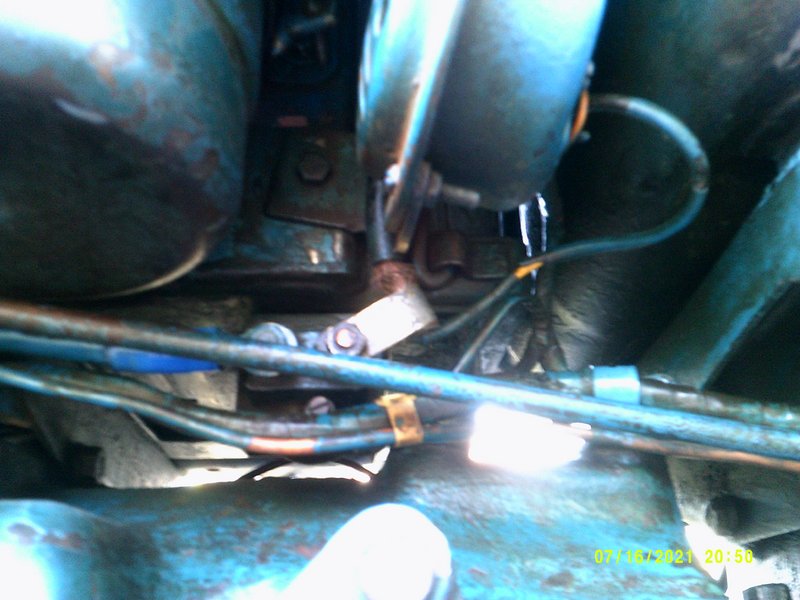 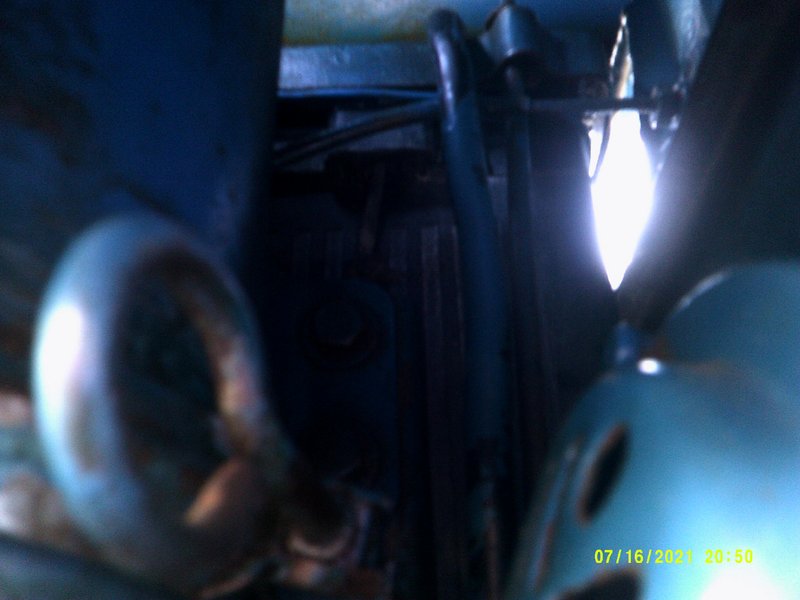 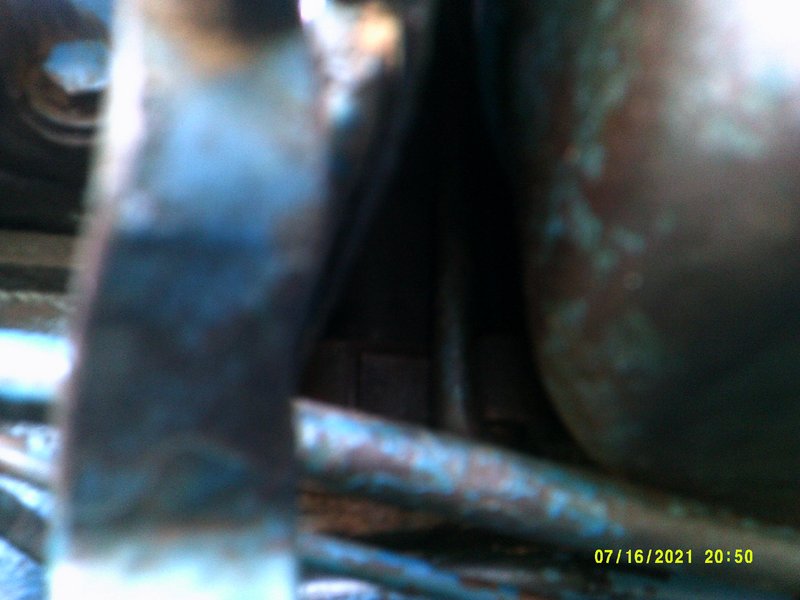 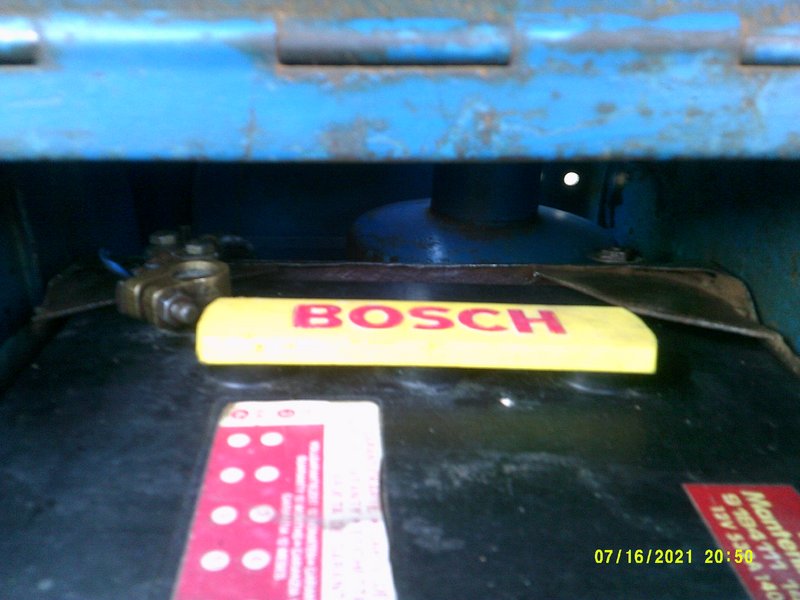 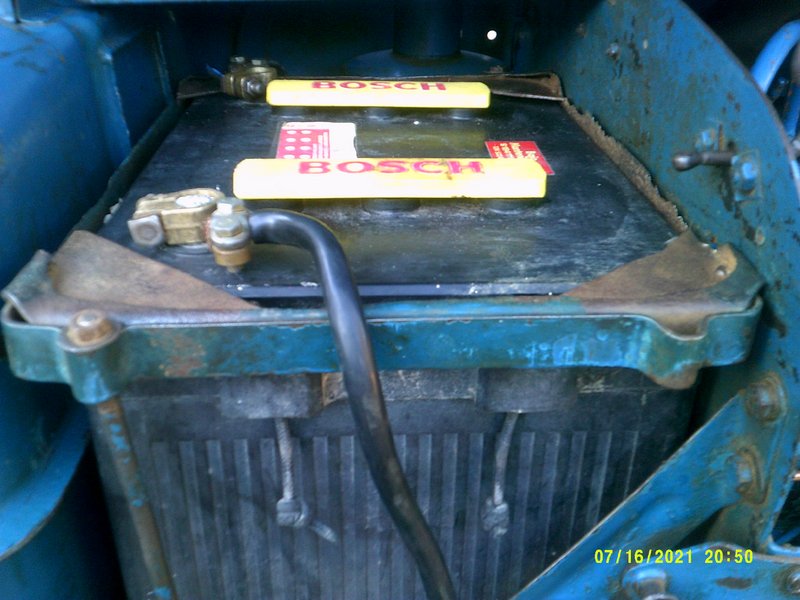 And here it is as we get the tank out of the garden, the LH tank wheel needing a puncture repair soon. 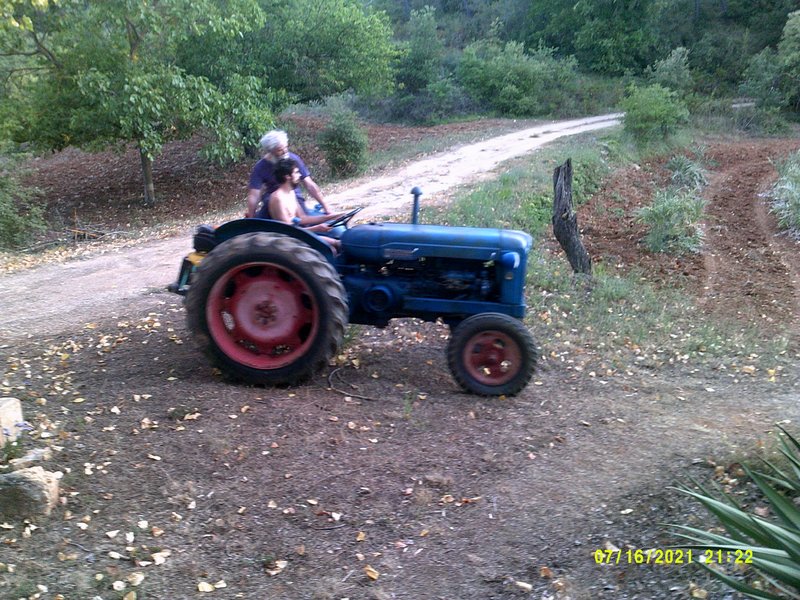 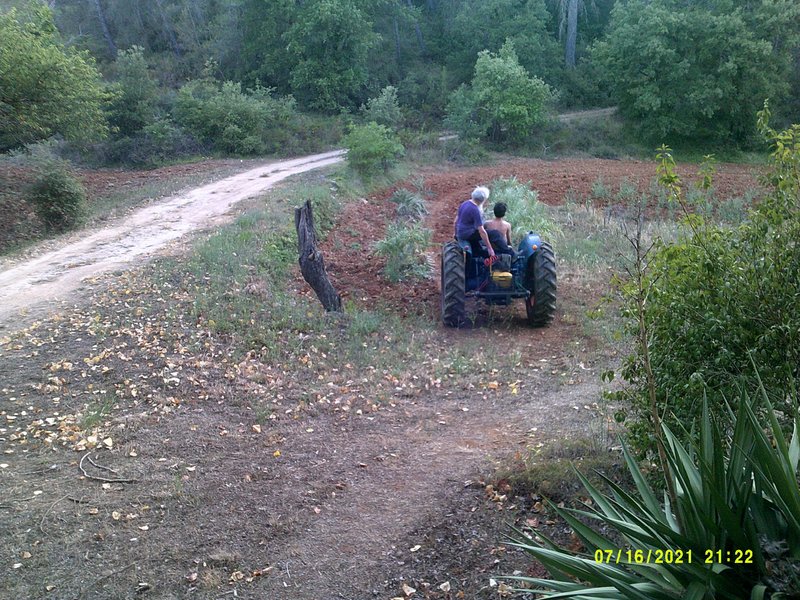 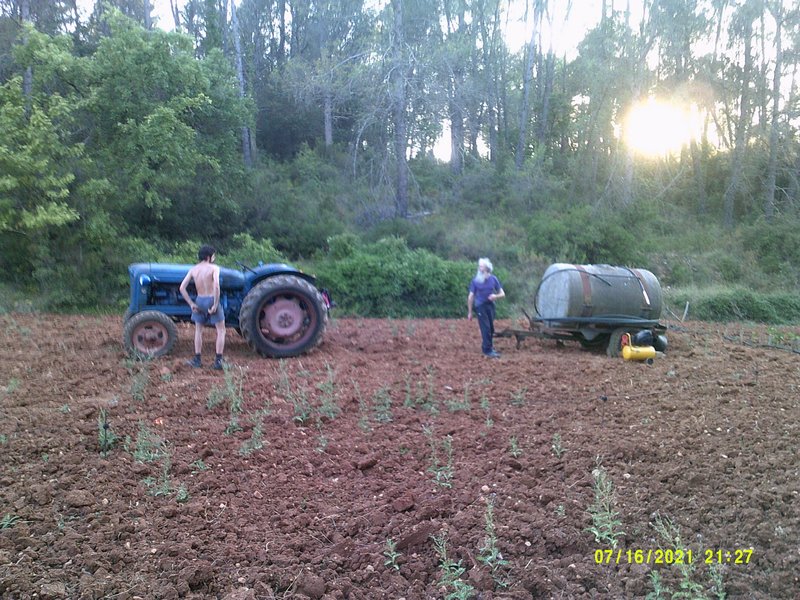 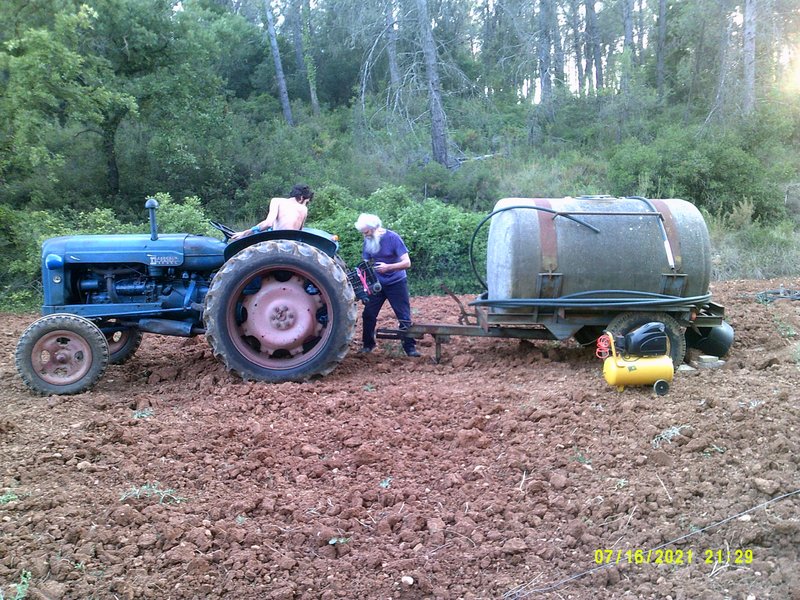 Hi Sandy, are the rubber injector seals leaking on Billy? I noticed the bits of rag tied round them
My biggest fear is that when i die my wife will sell my tractors for what i told her they cost
Top

Yes they are, but not much and only after running. We might do something about it, but it's not alarming, it helps to keep him clean with those rags but not much more.
Sandy

This stuff is amazing, i've used it on injector rubbers, water pumps, rusted thermostat housings and even pitted liner seal grooves. I think they sell it on amazon
John
https://www.google.com/url?sa=t&source= ... s9uLHAdrzi
My biggest fear is that when i die my wife will sell my tractors for what i told her they cost
Top

That was the sort of stuff I was thinking of for them, but we need to do it when we're not doing much and it's not too hot (as it is now). Billy has many more leaks but only one is serious (pedal cross shaft on both sides, it just pours out) and we're pretty close to being able to fix it.
Sandy

It's not cheap but well worth the money. There's always a few jobs to do to keep these old tractors running but it's well worth th effort
John
My biggest fear is that when i die my wife will sell my tractors for what i told her they cost
Top

We realised we could date the battery more accurately, here's a pic of the guarantee, although the specific month and year are unknown at the moment. It's still doing fine. 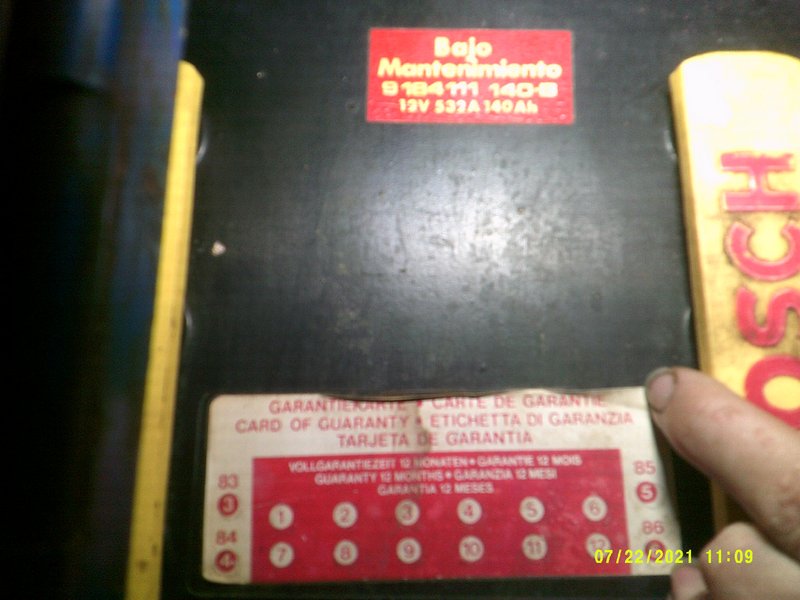 Just a quick update.
All of the batteries here

have been on the charger, only the old one that Billy's using now (the oldest one of all) and the Renault 4 one on the left (this one hasn't had the powerful charger on it yet) have been close to doing something on the test with the Hurricane starter.
Additionally, all our other batteries are out, awaiting charging, charging or awaiting more drastic action. 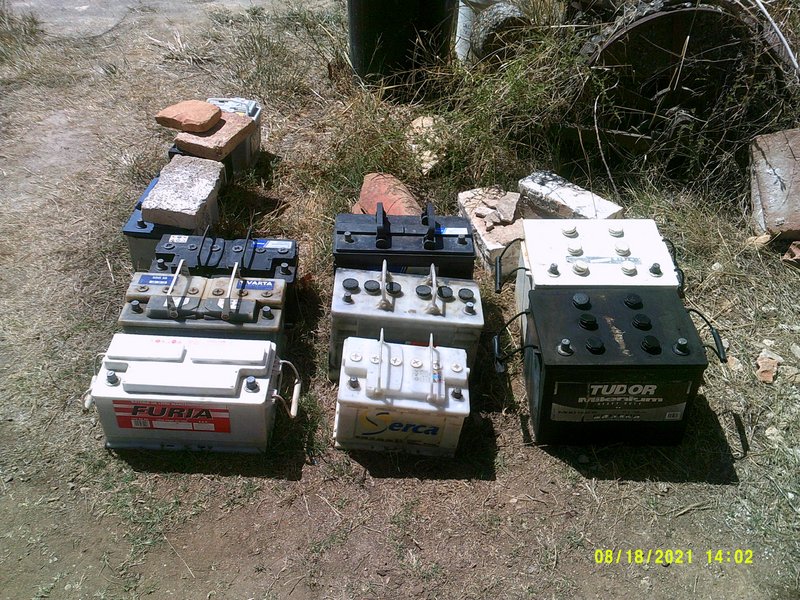 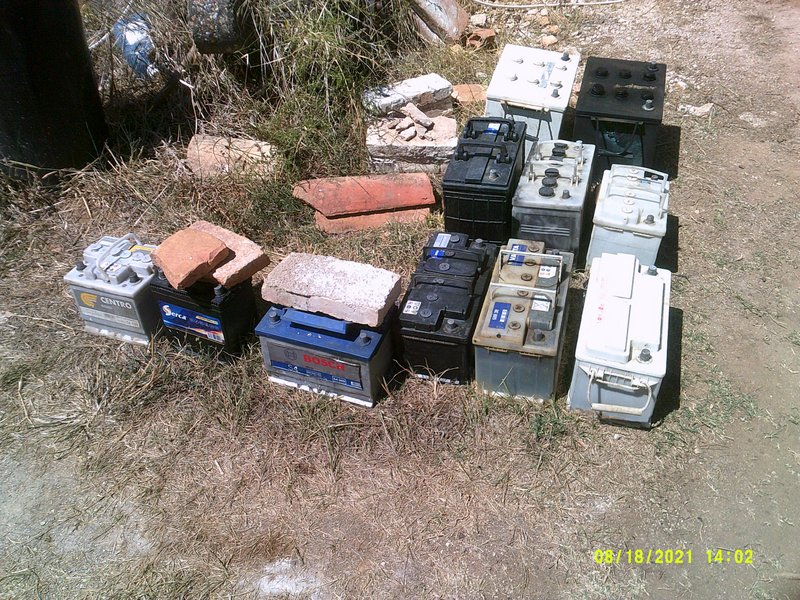 This battery on charge now started at -0.6V! It's never been used, our neighbour had it and was going to dispose of it but I thought we should try it as it's brand new. 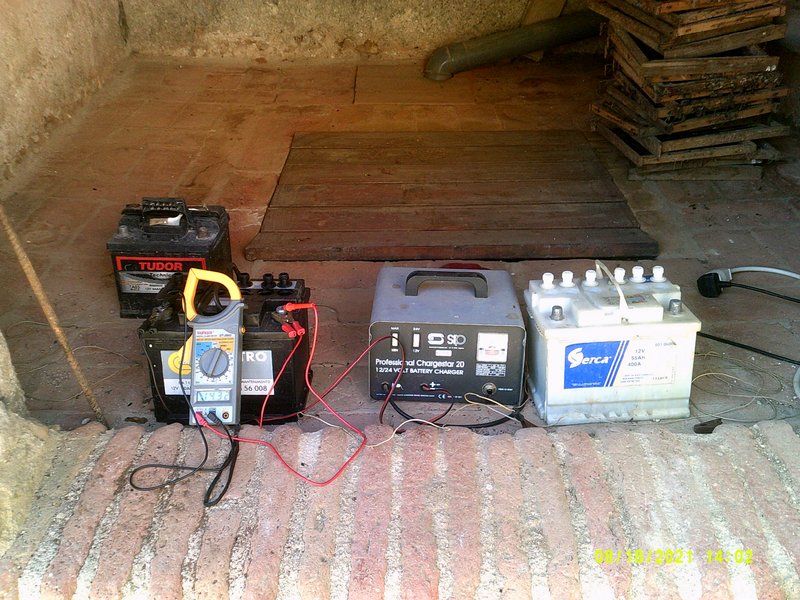 The next step will be a good clean and new electrolyte with Epsom salts to see if something will come from this, we'll need distilled water for that, and we're quite short of normal water at the moment, so we won't be doing this for a while yet.
Sandy