by MikesDexta
Saw this fired up at Patrick Edwards Tractor Jumble, awesome beast 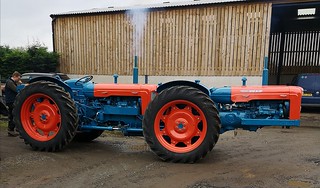 by oehrick
I'd just have to respray that sea of orange Mike, 'tisn't decent

by MikesDexta
ah but if you google Super Major Doe Triple d most are this colour scheme, even a model of one! I'm no expert mind, I just posted this as it sounded splendid, probably nothing special to the owners on this forum though..

by oehrick
Just because it's correct doesn't make it right

I actually like the later blue / grey liveried Ford skid unit Does better than the earlier Major derived versions, something in the angular tinwork and the colours just gelled.

Saw a video yesterday with some Australians who had built a Case based clone in the 60's who didn't appear to know it had been invented in Essex, war surplus smooth tread bomber tyres, orange & white is definitely wrong !
All times are UTC+01:00
Page 1 of 1