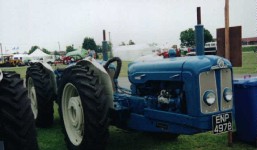 In the late 1960s and through to the middle 1970s, tractor HP in England was low. The Ford 5000 at 65 hp was a large powerful tractor so something like the Doe was massive indeed. The tractor started from an idea that, on the heavy Essex and London clays, two tractors could be joined together to pull the plough or sub soiler then for the spring work they could be separated and used as individual units.

This idea did not work and as the tractor became more sophisticated with electrical and hydraulic controls to work the gear and throttle changes, the splitting up of the unit became impractical.

Tractor production in the late 1970s when manufacturer prices went up and firms started to bring out their own high hp tractors.

Two Does in particular spring to mind. In the late 1960s my job was to sort out problems on peculiar machines so I got a number of Does to work on. I loved it!!

A farmer about ten miles from the workshop had a gearbox failure on the front tractor of a Super Major based Doe. I went out to the tractor and decided to run it back to base, as the farmer had no workshop. I drove it in and was then allotted a workshop bay that was only 12 inches longer than the tractor. It was quite a challenge, and with my workmates looking on I reversed the tractor until it was up against the wall at the back, then just straightened the steering wheel and we were in. The front tractor would turn at nearly 90 degrees to the back tractor in either direction.

I serviced the gearbox and reassembled the tractor. Then I was sent on another job, a Ford 3000 was ploughing on some water meadows about three miles from the depot. It blew an engine in the field and was immobilised. Because the land was so wet it was impossible to get my Ford Escort van to the tractor so we loaded all the tools and some chain onto a nearly new Ford 5000 we had for sale at the works and my apprentice and I used this to get down to the 3000.

After removing the plough we decided to tow the 3000 to dryer ground. The farmer directed us around the field headland to get to the front of the tractor. As we had towed it backwards and passed the gate, there was no room to get the 5000 past without running on the ploughed work. He forgot, however, to inform us that the bottom headland contained a filled in ditch where two fields had been joined.

The 5000 found the ditch!! In no time flat it was down over the axles, the front wheels were under the soggy soil and you could walk from the footplate to the ground without stepping down. The only way out seemed a heavy recovery vehicle. Then I thought of the Doe waiting at the works for me to drive it back to the farm. We walked back to base and rang the farmer who agreed to let us use the machine for an attempt at recovering our 5000.

We took it back to the field, only to find the 5000 down at the front and the whole axle now hidden. After about an hours digging to find the drawbar we chained the two tractors together and were ready for the pull. With the Doe in a high gear and at half throttle we tried.

The Doe went down like a lift with all four wheel scrapping. Soon she was belly down and we were looking at a really major recovery job when suddenly she hit hard gravel under all four wheels. It was just like sitting on a rocket as she came out of the hole. Dragging the 5000 with her. Was I relieved!!! Both tractors had to be washed down but sales were happy we had not left the 5000 in the field and my manager was happy as heavy recovery was not needed.

The second Doe I looked after and had good memories of was one of only two ever built. Does kept the sister machine for experimental purposes and eventually returned it to two tractors. The second machine was sold to our customer. It was a Doe 130 Selecto-Speed. This was the best pulling tractor I have ever driven. The gearbox was wonderful (when it worked). The driver still lives and works a few miles from me and when ever we meet the conversation soon turns to Do you remember when the Doe........?

We had to have the tractor in for repair a few times as the farmer really worked it hard with large implements. The two gearbox selector levers were linked by a massive cable that was controlled by a lever about 1m long mounted to the drivers right. The tractor was also fitted with a Fitzmier cab that was mainly a wrap around windscreen and a canvas roof and sides. The windscreen pivoted upwards to allow you to get to the seat.

Orbital steering was also fitted. This made driving this tractor in the field and on the road very interesting. It was a little like flying a helicopter. First you had to watch both exhaust pipes on the tractors. If one tractor was smoking more than the other, the gear lever had to be jiggled as the tractors were in different gears due to the length and droop of the gear linkage cable. Then there was the old orbital steering fault. You had to keep constantly turning the wheel in one direction or the other to keep the tractor in a straight line. It was quite a beast.

She ended up in Africa I think. I brought her into the workshop for hydraulic failure. When we stripped out the back tractor, the final drives had started to break up. It was decided to strip her out completely and find out cost of repair. By the end of three days, all that was left of the two tractors was a heap of parts on ten works mobile stands. The largest part of the tractor left was the turntable unit. Two rear ends, two Selecto-Speed gearboxes and two engines were all dismantled. This included injection pumps and electrical components. An estimate was prepared. Three months later my manager said Mr Head has decided to have a new tractor, we have sold the Doe for export. It must be running and on the boat in four days. Just slip it back together!!!

We managed it!! Just!! But in the meantime parts that were OK such as bolts etc. had been borrowed as the consensus of opinion was that will never run again! but she did and I wish I owned her now.